MONTREAL—For a company that employs 300,000 people globally, sometimes it takes a little Canadian ingenuity to get ideas off the ground.

Such is the case for technology powerhouse Hewlett-Packard, which turned to Montreal-based plastics experts Lavergne Group to form a closed-loop “up-cycling” system to recycle printer cartridges to make new products while reducing the amount of virgin plastics in its manufacturing operations.

“This was not only an unprecedented innovation in terms of getting plastic back into electronic products, but even within the plastics industry it was viewed as a pretty incredible innovation,” said Dean Miller, recycling program manager with HP, during a recent tour of the Lavergne Group recycling facility in Montreal. “Not only because of the technical issues that were involved, but because of the scale (of the project.)”

Combining used ink and toner cartridges and other post-consumer products in the recycling process has kept an estimated 280 million cartridges and two billion polyethylene terephthalate (PET) bottles out of landfills, according to HP.

But reaching those historic levels of waste diversion wasn’t easy.

HP’s Planet Partners program, aimed at encouraging consumers to recycle electronic products, began accepting printer cartridges in 2000—the same year the company hooked up with Lavergne to begin discussing the idea of a closed-loop recycling process.

It would take nine years before the two began actually recycling cartridges in such a system using prototype equipment.

It took another two years to begin full-scale operation of the process, in 2011.

Prior to turning to Lavergne founder and president Jean-Luc Lavergne for help, HP relied on shredding printer cartridges to extract a percentage of the material.

In the original ‘shred and separate’ process, HP would sort disposed cartridges before shredding them and separating the plastics, where the recovered material was refined.

While that process is still used by the company for cartridges produced in low volume, HP was looking for a way to recover more plastic from its high-volume inkjet cartridges.

The goal was for new products to contain up to 70 per cent recycled material.

HP knew it wouldn’t be possible to rely solely on used cartridges for recycled material—according to Miller, the plastic breaks down during processing—and so the company looked to add another plastic product to the mix.

With Lavergne’s expertise in recycling PET bottles—the company has been up-cycling plastic beverage containers since 1995—HP was able to blend the recycled cartridge plastic with bottle plastic to create a better-quality resin.

However, HP was concerned the new resin wouldn’t have the same properties needed in the existing manufacturing facilities.

“Since we had molding tooling and production tools around the world worth millions of dollars that was already running the virgin resin, this material had to be a drop-in replacement,” he said.

Miller said this was the biggest sticking point while engineering the closed-loop recycling process.

“Lavergne was able to compound (its) combination of the recycled bottle material, our recovered PET and (some) additives to create a resin capable of going back into HP cartridges,” Miller said.

In the closed-loop process, used cartridges are shipped in from HP’s recycling facilities in Germany and Nashville, Tenn., before being disassembled using specialized machines, rinsed and turned into “HP clean shred” plastic.

From there, the HP plastic is blended with newly recycled and rinsed PET beverage bottles in the largest ‘V’-style blender in North America—it mixes approximately two tonnes of material at a time, according to HP—to create a homogeneous blend of recycled flake.

The last step before quality check is plastic extrusion, the process of combining recipe components and heating the batch to create pellets of high-quality recycled resin, which is ultimately shipped back to HP for its manufacturing processes. 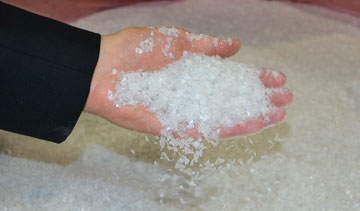 It took a lot of trial-and-error to get to the point where HP was recovering enough material to satisfy its recycled content requirements—Miller said at one point in the development phase a washing machine was loaded with used cartridge plastic as the companies looked for ways to mix ingredients—and much of the credit goes to the suburban Montreal firm.

The payoff, though, has been huge, as HP has manufactured more than one billion cartridges with recycled content.

Now HP is looking to expand on that success, hoping to boost the recycled plastic content in its printer cartridges to more than 80 per cent and find ways to expand the use of recycled materials in its full range of products, including printers and computers.

And you can count on a little Canadian ingenuity being involved in the process.