An RBC analyst says service disruptions to clients such as Halliburton have cause ``irreparable damage'' to shipper relationships. The railway says the issues a weather-related and are being addressed 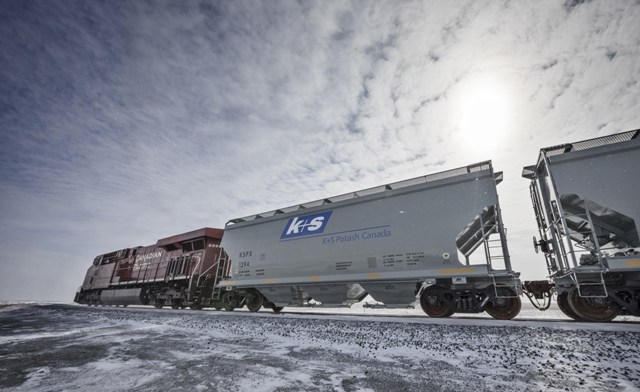 The analyst says CP has the capacity to handle higher volumes and is negotiating business away from CN. PHOTO: Canadian Pacific

Service on Canadian National Railway Co. has deteriorated to the point that clients are switching their cargoes to rival Canadian Pacific Railway, Walter Spracklin, a financial analyst for RBC Dominion Securities, said Feb. 15.

But a spokesman for the Montreal-based company said many of the short-term service problems are weather-related and the company is investing capital to address other longer term concerns.

Recent complaints about CN service by the CEO of energy services firm Halliburton, along with service disruptions on CN lines in areas such as the Port of Prince Rupert terminal in British Columbia, have raised questions among CN investors and caused “irreparable damage” to shipper relationships, Spracklin charged in a report.

Spracklin said weekly performance numbers show CN’s train speeds are down 17 per cent year-over-year compared with nine per cent for the railway group, and “dwell”—the time trains spend stopped at a terminal—is up a “staggering” 43 per cent compared to the group’s nine per cent.

“We highlight that CP has the capacity to handle the higher volume, and that they are negotiating new business away from CN—but on terms that are favourable to CP (to avoid experiencing similar ”digestion issues“),” he wrote in the report.

“We expect continued negative news flow on disruptions and disclosure of further customer shifts, which in our view will make CN’s premium valuation less appealing and as a result we expect further shifting from CN over to CP.”

CN spokesman Patrick Waldron responded that winter weather in Western Canada has been so severe it forced CN to run shorter trains about 75 per cent of the time, which means more trains are needed for the same volumes.

“This combined with increased volume levels across our business has resulted in congestion for all commodities and customers along our busy Chicago-to-Edmonton mainline corridor,” he said in an email.

“We are working with our customers to manage all traffic and clear backlogs for all of customers in the coming weeks.”

Waldron didn’t address the question of whether the railway is losing customers to rival railways.

Analyst Daniel Sherman of Edward Jones said in a report issued after the railway posted disappointing 2017 results that it appears to have expanded volume on its network beyond its capacity.

“We anticipate that management will catch capacity up to demand as we move through 2018,” the report said.