OPG plans $12.8B refurbishment of four nuclear reactors at Darlington 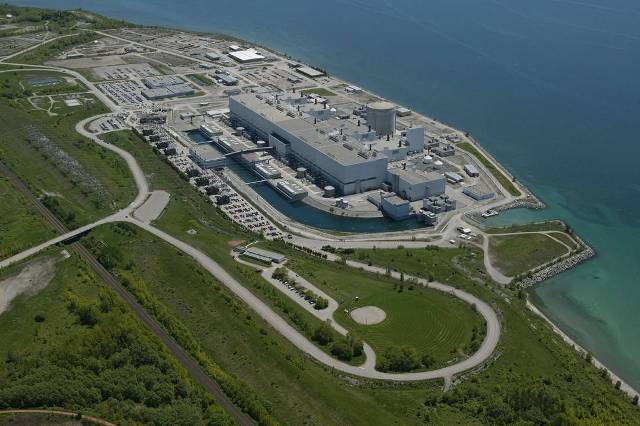 TORONTO—Ontario Power Generation will unveil plans for a $12.8-billion refurbishment of four nuclear reactors at the Darlington generating station east of Toronto.

The Canadian Press has learned the Liberal cabinet has given approval to start the rebuild of the first reactor this fall, and OPG will have to come back to the government for approval of each subsequent reactor refurbishment project.

Sources familiar with the announcement say the final budget includes a $1.7 billion contingency fund in case of cost-overruns on the $4.5 billion portion of the project done inside the reactor itself —the nuclear science work deemed as “subject to execution risk” versus the fixed contracts for the majority of the supporting infrastructure.

OPG estimates it would need between 7.2 cents-to-8.1- cents-per-kilowatt-hour to recover the total cost of the refurbishment, below current averages of 9.2 cents-per-kwh, but more than privately-owned Bruce Power will be paid under a new contract.

Bruce announced plans last month to spend $13 billion to refurbish six nuclear reactors at the generating station it operates under contract in Kincardine, on Lake Huron. It will be paid between 6.57-to-7.7-cents-a-kwh for the power generated by the refurbished reactors.

The Liberal government wants to extend the scheduled lifespan of the reactors at both generating stations, which would normally end around 2020, by about another 30 years.

OPG was “limiting risk by including contractual provisions that keep contractors and subcontractors accountable for any delays or overruns,” on the Darlington refurbishment, said one source.

Bruce Power assumed all risks of cost overruns for its nuclear rebuild project, which will start in 2020, four years later than originally planned.

Ontario’s only other nuclear generating station, in Pickering, is also scheduled to be decommissioned in 2020, and there are no plans to rebuild its reactors.

OPG president and CEO Jeff Lyash touted the benefits of the Darlington refurbishment in a recent speech, citing a Conference Board of Canada report showing it would generate $14.9 billion in economic benefits to Ontario and create 11,800 jobs a year during the peak of construction.

The government estimates there are 180 Ontario companies in the supply chain to refurbish the Candu reactors.

Premier Kathleen Wynne wants to keep generating about 50 per cent of Ontario’s electricity from nuclear power, and points out that her government cancelled plans to build a new nuclear generating station, which would have cost at least $15 billion.

Ontario’s opposition parties say the Liberals have made a mess of the electricity sector and have driven rates so high they are forcing companies to leave the province for cheaper-power in neighbouring provinces and states.

Anti-nuclear activists like the Ontario Clean Air Alliance say nuclear projects always run over budget, and they want OPG to abandon the refurbishment plans and instead import more electricity from Quebec.

Greenpeace Canada is concerned about possible accidents at nuclear generating stations, and says refurbishing the aging reactors at Darlington is not worth the risk.