EDC loans C$526M to Volkswagen to buy from Canadian suppliers 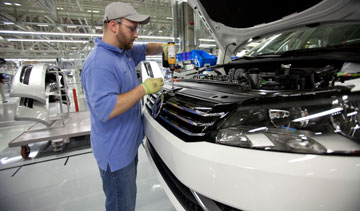 Volkswagen is focusing much attention on production in Tennessee and Mexico. PHOTO: Volkswagen

The financing should open doors for small and medium-sized Canadian parts and services suppliers to win new business with the global automotive giant as it ramps up its operations in the U.S. and Mexico.

The automaker recently announced an expanded US$920 million investment to build SUVs in Tennessee.

Volkswagen, the largest automaker in the world, comprises twelve brands from seven countries and holds a 12.8 per cent share of the global passenger car market. The group generated sales of C$266.5 billion (EUR202.5B) and an operating profit of $16.7 billion (EUR12.7B) in 2014.

“This financing is really about relationship building, both for EDC and Canadian SMEs in the tooling and automotive supply industries,” said Carl Burlock, Senior Vice-President, Financing and Investment, EDC. “The value here is that Canadian SMEs get a real chance to be considered by a major industry player, where they might not have an opportunity to gain that kind of access on their own.”

EDC targets companies like Volkswagen whose procurement needs match up with Canadian expertise. Once EDC’s team has a detailed understanding of a company’s supply chain and business goals they will provide introductions to Canadian companies with well-matched expertise.

“With the Southern US and Mexico increasingly becoming prime production locations for global automakers, EDC has a role to play in making sure that Canadian companies have the opportunity and financial wherewithal to compete for that business,” added Burlock. “When Canadian companies win business after our introductions, they won’t be left on their own. EDC can provide them with financing and insurance solutions to support their growth in these new markets.”

Canadian companies that may have an offer for Volkswagen can contact EDC.

EDC is Canada’s trade finance agency, providing financing and insurance solutions locally and around the world to help Canadian companies of any size respond to international business opportunities.

This story was edited on May 4, 2015. We removed the sentence “Volkswagen bought approximately $2.9 billion (EUR2.2billion) from Canadian suppliers in 2013” because we could not verify that figure.