Canada imported $34B of goods made by child workers in 2016, says report

The report from World Vision Canada points to a 31 per cent increase in imports of goods made by children, and calls for new laws that will force companies to publicly reveal their supply chains 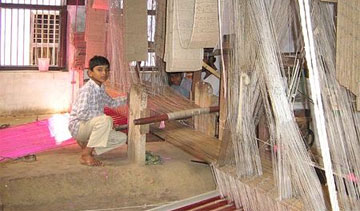 A boy next to two weaving looms in India. A new World Vision Canada report says goods made by children are on the rise in Canada. PHOTO: Matteo

OTTAWA—A new report says Canadians could be unwittingly purchasing billions in dollars of goods made by child labourers in other parts of the world.

The report, to be released today by World Vision Canada, suggests imports of so-called risky goods into this country totalled $34 billion last year, up from $26 billion in 2012.

That’s a 31 per cent increase, which the group says should be a wake-up call to politicians and consumers alike.

The report points to rising garment imports from Bangladesh, tomato imports from Mexico and footwear from India as reasons for consumers to check where products are made.

The report repeats a call for governments to enact new laws to force companies to publicly reveal their supply chains to prove their goods aren’t made by child or force labourers.

The report doesn’t accuse any Canadian company of being intentionally complicit in the use of child or forced labour, of which the group found no evidence.

It says an estimated 21 million people have been coerced, trapped or intimidated into performing jobs, with 5.5 million of these forced labourers being children.