An engineer, traffic controller and operations manager who worked for now defunct MMA Rail were charged with criminal negligence in the 2013 tragedy when a runaway train carrying crude oil derailed and exploded 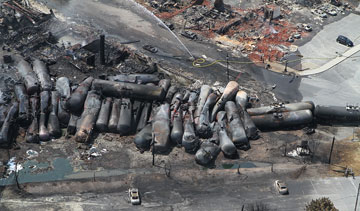 An aerial view of the charred wreckage of the train derailment that claimed the lives of an estimated 47 people in Lac-Megantic, Que. PHOTO Transportation Safety Board of Canada

SHERBROOKE, Que.—The three men charged in the Lac-Megantic railway disaster have all been found not guilty of criminal negligence causing the death of 47 people.

The jurors reached the verdict on their ninth day of deliberations Friday.

Tom Harding, Richard Labrie and Jean Demaitre were charged with criminal negligence in the 2013 tragedy that killed 47 people when a runaway train carrying crude oil derailed and exploded.

Harding was the train’s engineer, Labrie the traffic controller and Demaitre the manager of train operations.

All three worked for the Montreal, Maine and Atlantic Railway that operated in the Maine, Vermont and the Canadian province of Quebec between 2002 and 2014. It was headquartered in Hermon, Maine.

Each man pleaded not guilty.

None of the three accused presented a defence at the trial, but lawyers for each told the jury in turn the Crown had failed to meet its burden of proof.

The prosecution mounted a case that the three were each criminally negligent in their own way for failing to ensure the train was safe before the wee hours of July 6, 2013.

That’s when the locomotive and its cargo of crude oil from the United States rolled away and derailed in Lac-Megantic, exploding and then killing 47 people as well as destroying part of the downtown core.

The Crown argued that Harding’s role was a significant one because he didn’t apply a sufficient number of brakes after parking the oil-laden convoy for the night in nearby Nantes.

That left the locomotive, which weighed more than 10,000 tonnes, resting precariously on a slope 10 kilometres away from downtown Lac-Megantic.

Harding applied only half the required level of brakes and didn’t test them to ensure they worked properly before leaving for the night.

One of Harding’s lawyers countered that the rail disaster was an accident resulting from a perfect storm of unforeseeable events.

“We can’t hold people criminally responsible for not being perfect,” Charles Shearson told the court.

Shearson said Harding admitted to not conducting a proper brake test and failing to apply a sufficient number of handbrakes, which would have prevented the train from moving after its engine was shut off.

He suggested that evidence presented during the trial demonstrated MMA didn’t require its employees to perform brake tests perfectly in line with the federal regulations.

And Harding could not have foreseen the locomotive would catch fire after he left for the night, the lawyer added. Firefighters extinguished a blaze at the lead locomotive shortly before the tragedy and cut the engine, which meant the air brakes were not functioning.

The prosecution also blamed Labrie and Demaitre, arguing their responsibilities included taking the necessary steps to avoid injuries and loss of life the night before the derailment.

The prosecution claimed neither man deemed it necessary to check with Harding to see how many handbrakes had been applied and whether tests had been conducted.

Demaitre’s lawyer, Gaetan Bourassa, argued his client had no say in safety-related decisions made in the United States by the parent company of Montreal, Maine and Atlantic Railway.

Labrie’s lawyer, Guy Poupart, argued his client had a limited role in the tragedy. He also played up the testimony of several witnesses who described him as competent and reliable and someone they trusted.

As well, he noted that a good portion of the Crown’s case did not involve Labrie.