Between seemingly endless construction and allegations of road work-related extortion, Pierre Lacasse has his work cut out for him 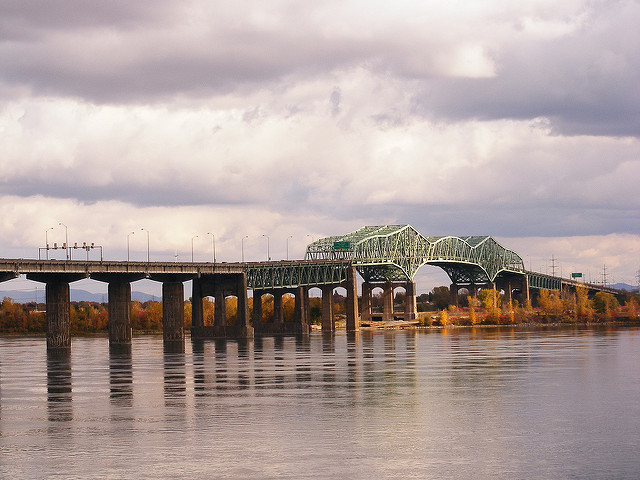 A replacement for the city’s 55-year-old Champlain Bridge has been in the works for years. Construction is currently underway on a new bridge. PHOTO: abdallahh/Flickr

MONTREAL—In Montreal it is not uncommon for a section of road to be closed for repair work, asphalted and reopened to traffic for a short period of time, only to be excavated once again for more construction.

Driving through the city has become a sort of theatre of the absurd, with exasperated motorists staring incredulously as city workers lower dirty orange cones from a pick-up truck to demarcate yet another work site.

As the November municipal election approaches, the image-conscious mayor has plucked an ex-traffic reporter out of retirement to become the friendly face of the city’s construction-induced traffic nightmares.

Pierre Lacasse’s job is to help co-ordinate roadwork to ease congestion. And perhaps more importantly, he will be a spokesman for all things traffic-related, offering citizens information about why the work is occurring and how long it will last.

What is unknown, however, is whether more information will give citizens more trust in city officials who are considered in some quarters—with regard to managing construction work at least—to be, at best, inept, and at worse, corrupt.

“I know the song, I evolved in this system for 28 years,” Lacasse said in an interview about his career as a traffic reporter. He said he knows he’ll be a sort of ‘punching bag’ for frustrated citizens and journalists.

“I’m here to try and reduce the counter-shocks, regarding the construction projects that have been announced over the next five to 10 years.”

“We’ve had decades of well-known and well-documented corruption in the construction industry,” Sauve said. “People are rightly cynical and that’s why it will take decades to repair the mess.”

What might not help citizens regain trust in their officials are embarrassing headlines such as a recent story by a local newspaper that reported how city workers allegedly demand bribes from entrepreneurs in order to have work finished in a timely manner.

The province is spending $1.4 billion over the next two years to repair neglected underground water infrastructure as well as highways, roads and bridges.

Major projects underway in Montreal include replacing the city’s Turcot interchange and the crumbling Champlain Bridge, as well as the creation of an urban walkway stretching from the St. Lawrence River to Mount Royal that included demolishing part of the raised Bonaventure Expressway.

“Nobody cares about infrastructure that is 100 years old,” Friedman said. “What wins elections is a photo with the mayor cutting a ribbon for a new community centre. But the city is losing 30 per cent of its underground water to leakage.”

While Lacasse’s position is not unique in Canada—Vancouver has someone who looks after all aspects of transportation in the city—it might be the most challenging, due to socio-economic factors.

Aside from a history of corruption and the penchant of politicians for neglecting infrastructure, Montreal has the lowest home ownership rate out of all major Canadian cities, said Aubin.

“That means politicians don’t feel the same pressure (in Montreal) as they do in most cities to keep up with unglamorous infrastructure,” he said.

Homeowners, he explained, tend to care more about city services as they are more firmly rooted in communities.

Montreal, a city of renters, is full of tenants “who can more easily move if the quality of municipal life declines,” Aubin said.

Lacasse remains undaunted, though he acknowledges his role is to advise—not to enforce.

For instance, if a road is opened up for more work a mere two weeks after it was closed, he has little power to do anything about it.

“I will have my say on that, but I won’t be the boss,” Lacasse said.

And regarding corruption, such as the recent news report about workers allegedly demanding bribes, he said, “That is not my mandate.”