by Shawn Jeffords and Allison Jones, The Canadian Press  May 28, 2018

Ontario's premiership hopefuls took to the debate stage on the evening of May 27. Recent polls suggest Andrea Horwath has surpassed Doug Ford in popular support, while incumbent Kathleen Wynne is a distant third

TORONTO—Doug Ford came under repeated attack from both the NDP and Liberal leaders during Sunday’s provincial election debate for not yet presenting a full platform, when Ontarians are already casting their ballots in advanced polls.

Recent polls have suggested the NDP has surpassed Ford’s Progressive Conservatives in popular support, which also made party leader Andrea Horwath a target in the third and final televised debate of the campaign. But she shot back at Ford after he slammed the NDP over an error in the party’s platform that means it would cost $1.4 billion more per year than expected.

“We did admit that there was a mistake and we fixed it right away,” she said.

“We haven’t even seen any numbers from Mr. Ford. People started voting yesterday, Mr. Ford—where is your platform? Where is your respect for the people now, when they’re already at the polls and you haven’t provided them any information about what it is you plan to do in our province? What are you going to cut?”

Liberal Leader Kathleen Wynne—whose approval ratings plummeted below 20 per cent as premier, and whose party is a distant third in the polls—slammed Ford as well for not having a plan. As Ford criticized the state of the province’s health-care system under the Liberal government, he said he would consult with front-line health-care workers to fix the problems.

“We’re going to make sure that we listen to the front-line doctors and the nurses,” he said. 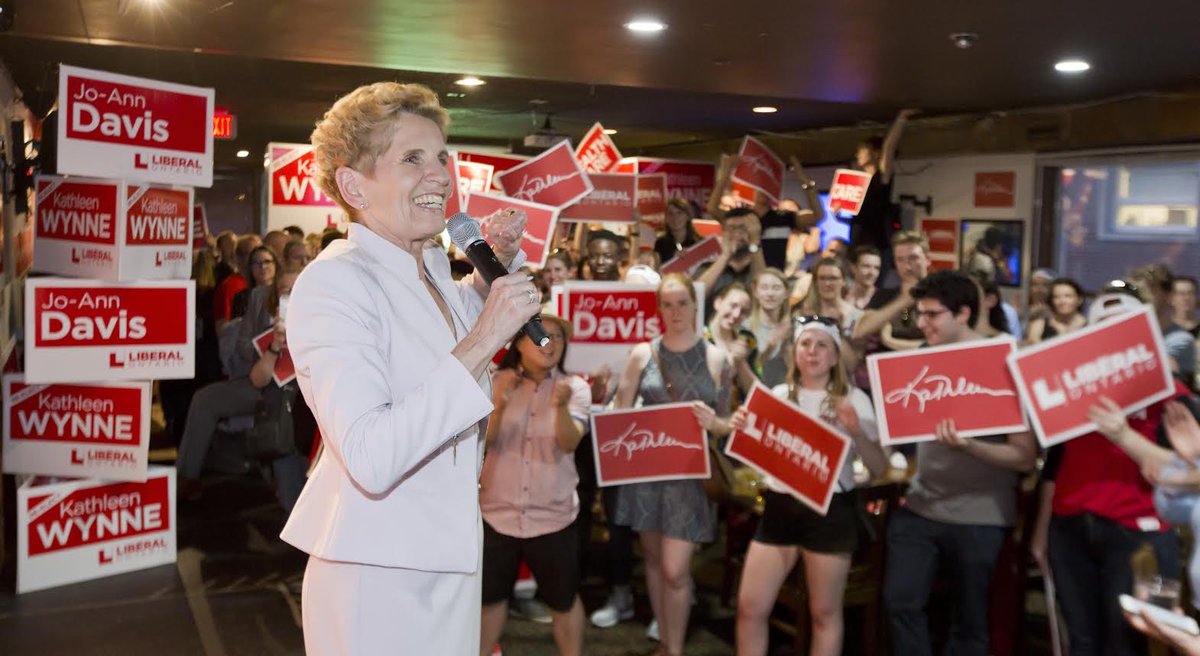 Wynne took the opportunity at the debate to defend her government’s record of achievement. PHOTO: Kathleen Wynne/Twitter

Questions about funding Ford’s pledges have largely been met with vague promises of finding “efficiencies.” The Liberals and NDP say that just means cuts to public services, but Ford has said his efficiencies wouldn’t result in a single job loss.

Ford and Horwath’s attacks during the debate focused almost exclusively on each other, as polls suggest the two are leading the race to become the next premier.

Wynne, meanwhile, slipped a hashtag-worthy phrase into her opening statement.

“Here’s what I want to say about the last five years: sorry not sorry,” she said. “I’m really, genuinely sorry that more people don’t like me. But I am not sorry about all of the things that we’re doing in Ontario to make life better.”

Wynne used her question in a leader-to-leader section of the debate to challenge Horwath, who said she couldn’t imagine a scenario in which she would use back-to-work legislation—as the Liberal government did to end a five-week strike by college faculty last year.

“I know that you are beholden to the unions on this,” Wynne told Horwath. 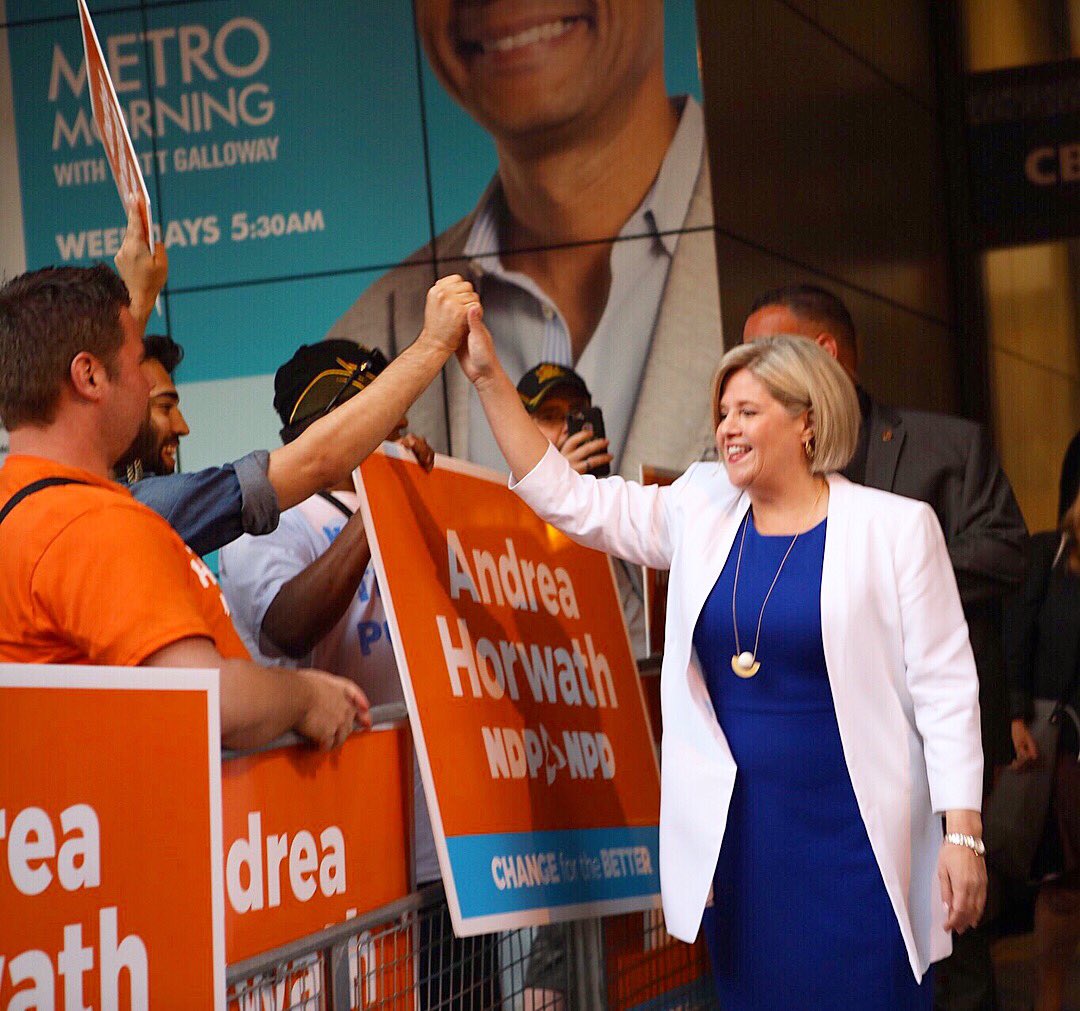 Horwath was attacked by Wynne for a comment about back-to-work legislation. PHOTO: Andrea Horwath/Twitter

Wynne argued there needs to be a tool to end labour disputes, while Horwath said such legislation isn’t a tool, it is a removal of constitutional rights.

But largely the debate had Horwath and Ford sparring.

When the NDP leader said her leader-to-leader question was for Ford, he said he “wouldn’t expect anything different” and she replied, “Well, that’s good, you’re catching on.”

“Show us the plan, Mr. Ford,” Horwath said, repeating her call for him to release a fully costed platform with less than two weeks to election day.

“You wouldn’t buy a used car without looking under the hood. Why should anybody buy your plan without seeing it?”

Ford, who has refused to say when he would release his full plan except to say it would be before June 7, warned that an NDP government would bring economic turmoil, invoking former NDP premier Bob Rae in suggesting businesses will move to the United States.

“The NDP will annihilate, my friends, the middle class,” he said. “We’ve seen it before.”

Ford’s lack of a costed platform could be something that hurts his credibility with voters, said Western University associate political science professor Cristine de Clercy. 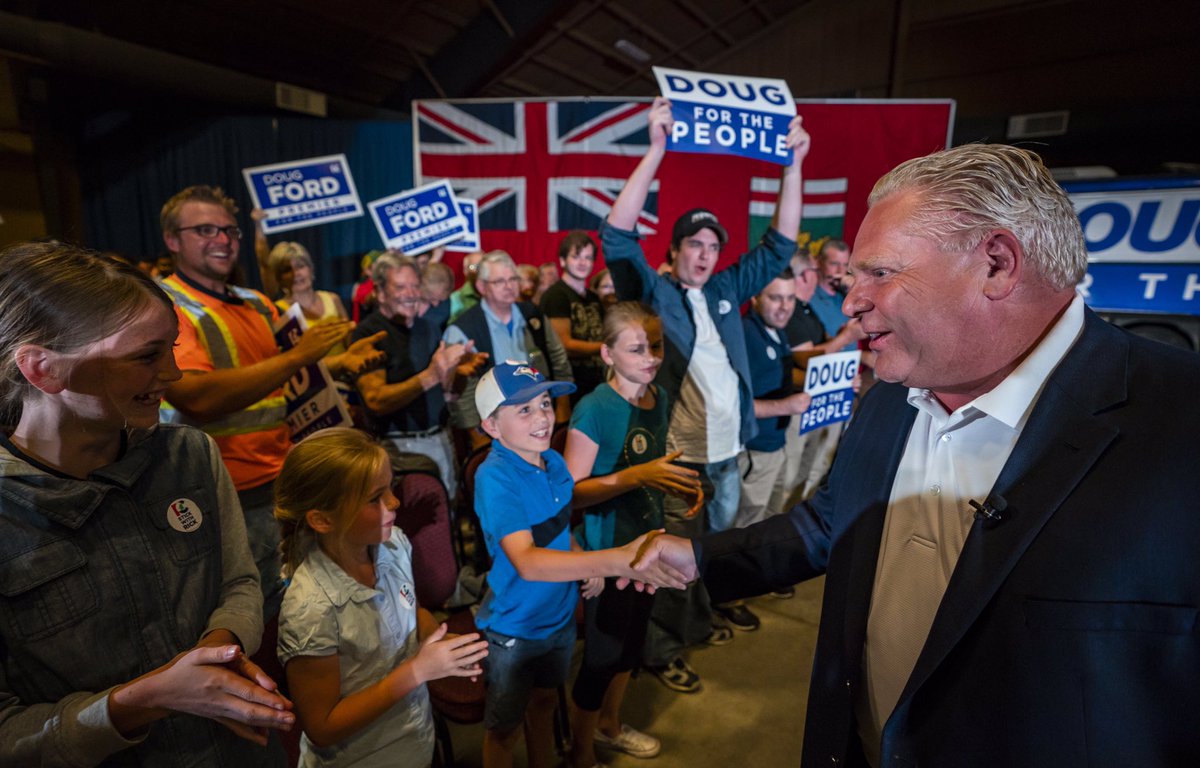 Ford hasn’t released a costed platform, and his rivals pounced on him for it. PHOTO: Doug Ford/Twitter

“I think they generally made him look pretty foolish tonight over his lack of a platform,” she said. “He unconsciously contributed to this perception … by consistently attacking the other parties’ programs and then they would immediately rebut and say, ‘Well what about yours?’ He doesn’t have a good answer for that.”

De Clercy said all three leaders performed better than she had expected, achieving what they needed to during the debate. Horwath was confident and positive but forceful, she said.

“I thought, she’s ready for prime time,” she said. “This is someone who is working at communicating she can govern. I’ve been watching her for a while and I’ve never had that impression before.”

De Clercy said she thought Ford did well and went to great lengths to paint a stark picture of Ontario under an NDP government.

“He used the word ‘terrifying’ several times,” she said. “It was clear to me that he sees the challenge in Ms. Horwath and he really pulled out all the stops, he did every thing he really could to signal to voters why the New Democratic Party is not a good choice.”

Wynne’s “sorry, not sorry” defence was a novel good way to address her unpopularity, but may not matter in the end to voters, she said.