"I want to confirm that in Ontario the carbon tax's days are numbered," Ford said. His team estimated challenging the federal carbon tax in court would cost taxpayers $30 million over four years 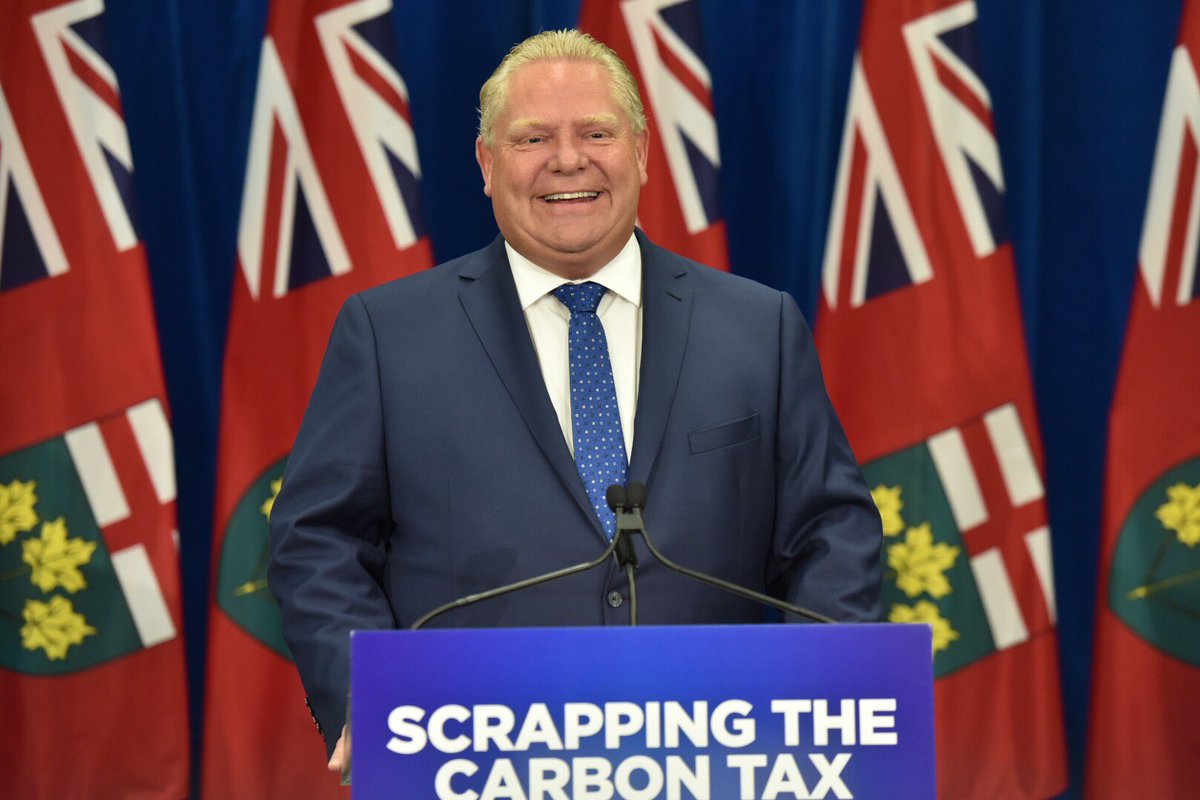 Critics are concerned how Ford’s government will make up for lost revenue from the cap-and-trade system if they scrap it. PHOTO: Doug Ford/Twitter

TORONTO—Doug Ford said Friday he will scrap Ontario’s cap-and-trade system and fight a federal carbon tax as soon as his Progressive Conservative cabinet is sworn in later this month because the measures hurt families and do nothing for the environment.

To that end, the incoming premier said he will give notice of Ontario’s withdrawal from the carbon pricing market it shares with Quebec and California when he takes office on June 29.

Ford, whose party won a majority of seats in last week’s election, said the government will provide clear rules for an “orderly wind down” of cap and trade, but did not specify when the legislature will be recalled to implement the bill needed to dismantle the system put in place by Kathleen Wynne’s Liberal government.

“Today, I want to confirm that in Ontario the carbon tax’s days are numbered,” he said. “In fact, upon the swearing in of my new cabinet, at the top of our agenda the very first item will be to pass an order to cancel the Liberal cap-and-trade carbon tax.”

Ford also said he would challenge the federal government’s rules requiring provinces to have carbon pricing in place.

“I will (be) directing my attorney general to use all available resources, to use every power at the government’s disposal, we will officially challenge the federal government carbon tax on Ontario families,” he said. “Because the cap-and-trade and carbon tax does nothing for the environment.”

Environment Minister Catherine McKenna fired back, saying Ottawa is considering all options, including giving revenues from the carbon tax directly back to Ontario residents instead of the provincial government.

“Climate change is real and its impacts do not stop with a change in government. Canadians expect us to take serious action to protect our environment and grow our economy,” McKenna said in a statement Friday evening.

“Ontario’s premier-elect gave notice today that he is not interested in fighting climate change and is effectively withdrawing from Canada’s national climate change plan.”

Eliminating cap-and-trade will help deliver on a campaign promise to cut gasoline prices by 10 cents per litre, Ford said, while adding that he was putting gas distributors “on notice” about price fluctuations ahead of holiday weekends.

Ontario has made close to $3 billion in a series of cap-and-trade auctions since the system was introduced by the Liberals last year. Ford has consistently opposed carbon pricing and has come under fire for failing to explain how he would make up for the lost revenue.

Trevor Tombe, an economist with the University of Calgary, said if Ford’s goal is to drive down gas prices he didn’t have to scrap the entire cap-and-trade system to achieve it. The Tories could have kept the program in place but exempted gas distributors who could have then lowered their prices by four or five cents.

That combined with a cut to the provincial excise tax on fuel would lead to a 10-cent-per-litre cut at the pumps, he said.

Tombe said there are no “insurmountable hurdles” that would keep Ontario from scrapping the system, but the government will need to address the billions in permits sold in previous auctions.

“The money raised is earmarked for a number of spending initiatives,” he said. “The government could simply not proceed with those initiatives and instead return the money.”

Quebec Premier Philippe Couillard said Friday that his position has not changed and that “the whole world is moving in this direction” to promote a carbon market or a tax to fight against climate change.

“This is the fundamental measure. All the evidence is there,” he said, adding that Quebec would continue in the same direction as California.

“It is believed that every Canadian province must make a visible and practical commitment to the fight against climate change.”

The opposition parties expressed concern about the loss of revenue from cap-and-trade and the programs the money would have supported.

“How will Mr. Ford replace the $1.9 billion per year that the cap-and-trade auction brings in for the province?” said NDP legislator Peter Tabuns. “Will he be making another $2 billion in cuts to programs Ontarians count on?”

Ontario Green party Leader Mike Schreiner, who was elected to the legislature last week, said cancelling pollution pricing without a backup plan would send a signal to clean companies that the province is not open for business.

“It is unfortunate to see Mr Ford’s sloganeering and back-of-the-napkin ideas continuing post-election,” he said.

Environmental groups panned the move, calling it a bad idea for the environment and Ontario’s economy.