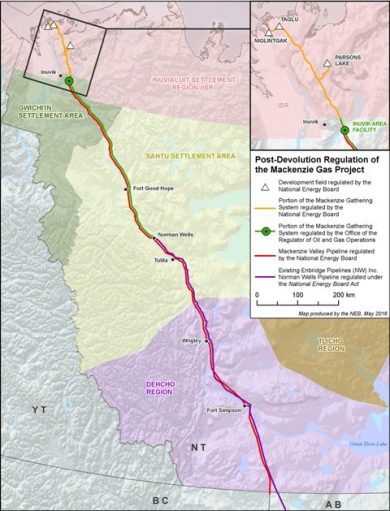 The pipeline, which would ship natural gas from Northwest Territories to northern Alberta, was originally sanctioned in 2011. Low gas prices and new shale sources in the U.S. and Canada have inhibited development. PHOTO: NEB

CALGARY—The National Energy Board is giving Imperial Oil until the end of 2022 to start building the long-delayed Mackenzie Gas Project, a pipeline that would ship natural gas from the Northwest Territories to northern Alberta.

The board originally approved the project in December 2010 and the federal cabinet of then-prime minister Stephen Harper sanctioned it the next year.

But one of the conditions was that construction had to start by the end of 2015.

Last year, Imperial Oil asked the board for a seven-year extension on that deadline because low gas prices had forced the companies behind the project to delay development.

The NEB said it recognizes that the project isn’t currently economic and would give the project’s backers more time to allow for markets to recover.

In granting approval of the extension June 2, the board said that the project doesn’t require new public proceedings and is still in the public interest.

The decision now goes to the federal cabinet of Prime Minister Justin Trudeau for final approval.

A spokesman for Natural Resources Minister Jim Carr said cabinet would make a decision before the end of September when the current project certificate expires.

The natural gas market has been transformed since proponents first filed for regulatory approval more than a decade ago, with shale formations in Canada and the United States providing a closer, cheaper and more abundant source of natural gas.

Premier Bob McLeod of the Northwest Territories has been a supporter of the project, saying it would bring prosperity to the North, but some groups have opposed it on environmental grounds.

Ben McDonald of advocacy group Alternatives North, who opposed granting the extension in public submissions, said views on the environment have changed since the project was first approved.

The proposed pipeline would run 1,200 kilometres from gas fields near the coast of the Beaufort Sea to the northern Alberta boundary, where it would link up with existing gas pipelines.

In late 2013 Imperial estimated the cost of the pipeline at $16.1 billion, while the network of pipes and facilities needed to feed into the main pipeline would add another $5 billion to the price tag.