In reversal, Premier said she is open to having the GA charge appear as a line item on hydro bills; Wynne also affirmed she's "not stepping aside" despite flagging popularity 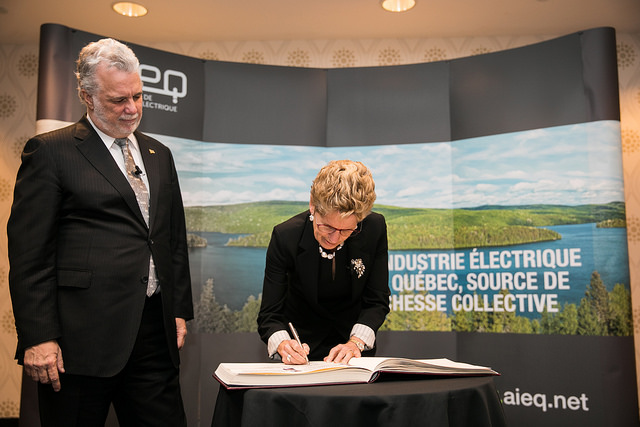 TORONTO—Premier Kathleen Wynne says she’s open to adding a line on hydro bills so Ontario consumers see a breakdown of the so-called global adjustment charge, which accounts for up to 70 per cent of electricity rates.

The Ontario Energy Board rejected a request from the auditor general to have a separate line item on bills for the global adjustment, a charge levied to cover the gap between the guaranteed prices the Liberal government promised electricity generators in long-term contracts and actual market rates.

Energy Minister Glenn Thibeault had said the Liberals would not overrule the arm’s-length Energy Board, but Wynne said Dec. 19 that the government should reconsider its position.

“I think being as transparent on bills as possible is a really good objective, but my challenge is greater than that,” she said in a year-end interview with The Canadian Press. “It’s not just about breaking out the number on the bill, it’s actually figuring out how to reduce that number.”

“Consumers are paying the global adjustment fee and should understand how much they’re paying by putting it on the front of their hydro bill,” said Vanthof. “A lot of people are unable to pay their bills, and they want to know why.”

The OEB also decided that consumers should not see a line item showing the cost of the Liberals’ cap-and-trade plan to fight climate change, which kicks in Jan. 1 and is expected to add about $5 a month to natural gas bills.

“That’s why this one’s an important one to ask the question on, is there a way to make it more transparent,” Wynne said. “I agree that if we can be more transparent about where the costs are coming from, and if we can do that then maybe we can get a handle on how we get some of those costs down.”

“It is our position she always had the power to do both,” he said. “I’ll believe it when I see it, but it’s something we’ve been calling on her to do for some time.”

Wynne said the Liberals spent billions of dollars upgrading and rebuilding Ontario’s electricity system, but admitted she made a “mistake” in not considering how hard soaring hydro rates were hitting consumers.

“There’s a cost associated with having clean air and not generating electricity with dirty coal and with jump-starting a renewables industry…but I didn’t pay close enough attention to the impact of that on people in their lives.”

The eight per cent provincial portion of the HST comes off hydro bills Jan. 1, but that’s less than the 10-per-cent discount provided by the clean energy benefit that the Liberals killed last January.

“There’s more we need to do,” Wynne said. “We’re looking around every corner and trying to find every opportunity to take costs off of people’s bills.”

With polls showing her personal popularity rating in the low teens, Wynne rejected suggestions she will resign to let someone else lead the Liberals in the 2018 election. The Liberals are delivering on their 2014 campaign promises to invest in public transit and infrastructure and grow the economy, she said.

“I’m not stepping aside,” Wynne said. “If we didn’t see job growth, if we didn’t see investment in the province, then that would give me pause, that would be a different thing, but what we’re doing is working.”