The former House of Commons Speaker and social conservative survived a 13-ballot battle against Maxime Bernier. Andrew Scheer is seen by some as a pragmatic, mainstream echo of Stephen Harper 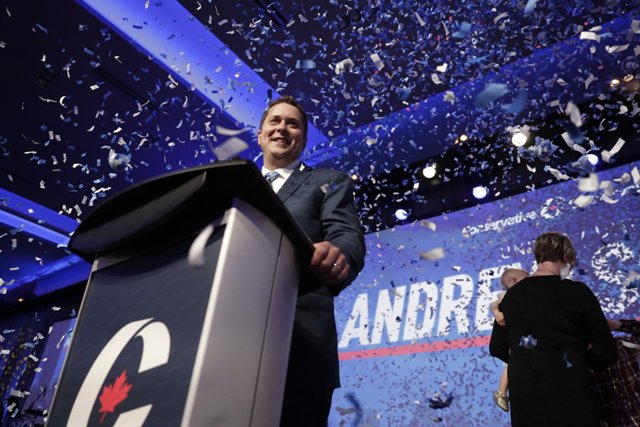 The Saskatchewan member of Parliament was feted by his fellow MPs and leadership rivals alike as he arrived May 29 to address the Tory caucus, fresh off a thrilling final-ballot win in the party’s leadership contest on the weekend.

He called the role a great honour, but an even greater responsibility.

And he wasted no time in issuing a call to arms to caucus members, invoking the name of former prime minister John Diefenbaker as he portrayed the Liberals as arrogant elites and the Conservatives as the party of the grassroots.

Diefenbaker had been criticized prior to the 1967 policy convention for being overly preoccupied with the interests of “hardworking Canadians,” Scheer said.

“We’re the party of everyday Canadians who work hard, who make sacrifices to secure a better future for their kids. That’s who we are, that’s who we fight for—that’s never going to change.

“The Liberals can take their cues from the cocktail circuit. We will take ours from the minivans, from the soccer fields, from the legion halls and the grocery stores.”

Scheer touched on all of the same themes he delivered following Saturday night’s win, hailing the efforts of the other 12 candidates who sought the job and singling out Quebec MP Maxime Bernier in particular.

Bernier was the presumptive front-runner throughout the race and the leader throughout Saturday night’s nail-biting process of elimination, right up until the last ballot. He did not stop to speak to reporters prior to Monday’s meeting.

Scheer did have significant support among other elected MPs going into the campaign, about two dozen by the end of it. Many of the rest had backed fellow MP Erin O’Toole.

When O’Toole dropped off the ballot, it appeared most of his supporters had picked Scheer as their second choice, as that’s who won on the next, and final, round.

Conservative MPs walking into the caucus meeting Monday said the party was united behind Scheer, including those who lost the leadership race.

“We’re a team,” O’Toole himself said. “There’s victory when there’s unity, and I think every MP is united behind Andrew Scheer, who I think will contrast very nicely to Justin Trudeau—and we’ll see that this week.”

Another leadership contender, Michael Chong, promised to keep pushing his often-unpopular ideas in caucus, namely his support for a carbon tax, a position that often garnered boos and catcalls during leadership debates.

“My track record shows that I’ve always been a loyal Conservative, but always somebody who is willing to fight for the ideas that I believe in,” Chong said.

“It’s a big-tent Conservative party with a diversity of views. You saw that on the floor of the convention in the way the vote broke out, so I’m looking forward to working with the new leader.”

Whether MP endorsements had anything to do with Scheer’s win is hard to tell. But the narrow, drawn-out nature of his win—he took 50.95 per cent of the support on the final ballot to edge out Bernier—indicates he has some unifying work to do.

“We have just completed a leadership race that showed the strength of our party and our movement, and we did this at the same time that many of us were competing against one another,” he said.

Indeed, the party showed off signs of renewed strength over the course of the race, in particular on the fundraising front, as well as on growing its membership rolls—a central strategic element of the leadership battle.

“Now imagine what we can do working together.”

Saskatchewan MP Brad Trost, who finished an unexpected fourth in the leadership contest, said he was happy to see Scheer benefit from the support of social conservatives who backed himself and fellow contender Pierre Lemieux.

He said Scheer will have to decide what to do about social conservative issues such as abortion.

Trost himself said he doesn’t plan to introduce any private member’s bills on abortion in this Parliament, but does believe social conservatives will have a clear voice in the party going forward.

Scheer also faces other political challenges, including his debut in question period as leader of the Opposition later today in the House of Commons. Prime Minister Justin Trudeau won’t be there, as he continues his overseas travels.

The political stakes have changed though for the Liberals, said Conservative strategist Alise Mills, who noted Scheer is younger than Trudeau, and with more experience than the prime minister had when he took over the Liberal party.

“Andrew is a parliamentarian through and through,” she said. “He’s going to be very quick on his feet in question period.”

The Liberals are also aware the political playing field is different.

In a fundraising email Sunday, they pointed out the Conservatives just finished their leadership race, a time when parties can connect with more people, welcome new members and raise more money, and Liberals asked for equal support .

“We now know who our competition is—and all of our progress for a stronger middle class is at stake,” the email said.

Scheer also has to look beyond the Commons and put the party on course for the 2019 election.

Central to success there will be victory in suburban and urban centres that the party lost in 2015. Scheer had mixed results there during the leadership campaign.

For example, in the Toronto riding lost by former finance minister Joe Oliver, Bernier triumphed with 67 per cent of points and took two out of three ridings in Etobicoke, the heart of the populist “Ford Nation” considered key to Conservative fortunes.

But in B.C., Scheer nabbed the urban riding of Vancouver South—home to the current Liberal defence minister but Conservative before that—and also the suburban Coquitlam-Port Coquitlam, lost by the Tories in 2015 as well.

A question for all of the defeated leadership candidates, and MPs past and present, will be whether they will run for office under Scheer’s leadership.

Bernier said Saturday night he felt he still had a place, as did O’Toole.

“Proud to be your wingman as we fight for Canada,” O’Toole tweeted.

Scheer will have the task of figuring out who his wingmen, and women, will be in the Opposition shadow cabinet.

People close to his campaign said he struck no deals in that regard during the leadership race, and it’s likely he’ll leave the current organizational structure in place over the summer and return with a refreshed bench for the fall parliamentary sitting.

Said O’Toole on Monday: “I’m the MP from my hometown. That’s an honour and I tackle issues that I care about. That will continue and I’m sure the new leader will use those talents in some way.”

—With files from Stephanie Levitz, The Canadian Press