A big drop in revenue from its ailing oil and gas, potash and uranium industries has hit province's books hard 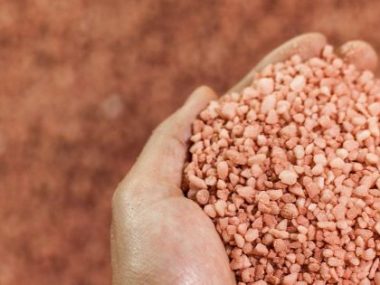 Lower revenue from its main industries, including potash, is one cause of behind the deficit. PHOTO: Canpotex

SASKATOON—Saskatchewan Premier Brad Wall says the provincial deficit is up to about $1.2 billion and wage freezes or job cuts are on the table for public-sector workers.

“(A) non-essential hiring freeze has been in place now in government for some time and we’ve made some progress, but we’re not anywhere near close to having dealt with this gap,” Wall said Feb. 6.

The gap is actually growing.

The government projected a deficit of $434 million when it introduced the budget in June. A fiscal update released last November by Finance Minister Kevin Doherty suggested that had gone up to nearly $1 billion.

The premier said the government spends about $7 billion on salaries and benefits for workers. The government “will have no success in bringing order to our finances if we cannot contain our payroll costs,” he said.

The new financial reality applies to anyone relying on provincial funding to deliver services, including municipalities, school boards, health care and universities.

“Our very base case, our minimum expectation, is that we will freeze the total (human resources) cost of government for this year and potentially for a few years down the road.”

Wall said a scenario being considered to help balance the budget this year includes some tax increases, cuts of 4,900 jobs in health care, layoffs in education and reduced support for vulnerable people.

Saskatchewan is also considering whether to privatize cleaning of government buildings. The Ministry of Central Services is exploring whether the private sector could do the job for less.

The Saskatchewan Federation of Labour has said that the government is attempting to make public-sector workers the scapegoats by demanding they pay for the deficit.

The premier said tax revenue is lower than forecast and crop insurance claims are up $250 million because of a late harvest.

The government is reviewing PST exemptions and the education property tax structure as it looks for ways to save money.

It’s also trying to save money because of a big drop in revenue from oil and gas, potash and uranium.

“For three years, we’ve been battered and bruised and buffeted by a stubbornly long down cycle in commodity prices. It’s been a perfect storm for Saskatchewan … and that storm is still blowing a little bit. We’re not out of it yet by any means.”

Wall told convention delegates that there’s no immediate bounce back in sight for non-renewable resource revenue.

But he said there are some optimistic signs for oil with prices above $50 a barrel and ongoing strength in agriculture, where the second-largest crop on record was expected last year.