‘We are free:’ Churchill celebrates return of train service with prime minister [WATCH]

Flooding last year damaged the town's rail line and stopped service. But, after a U.S.-based owner did nothing, the feds have stepped in and repaired the tracks. A Canadian partnership now owns the line 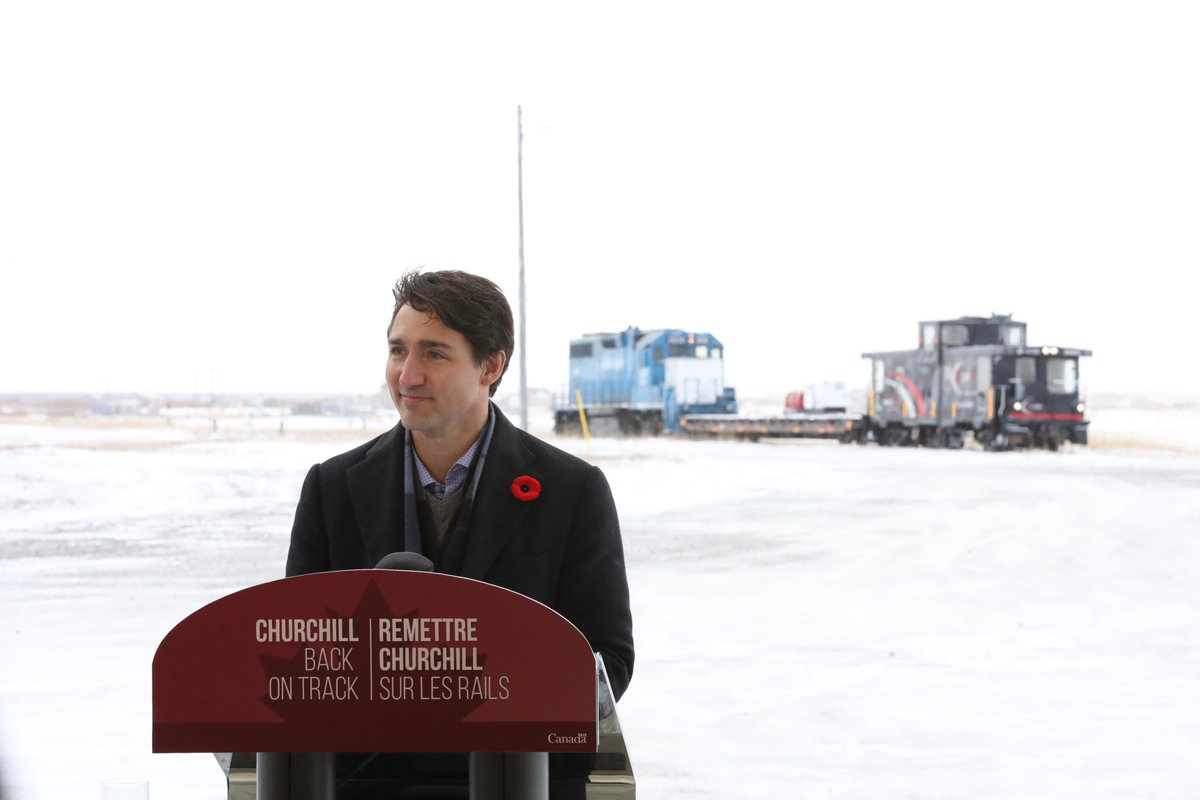 CHURCHILL, Man.—Residents of Churchill crowded around a bonfire during a street party to celebrate the return of rail service and a visit by Prime Minister Justin Trudeau to the northern Manitoba town.

Patricia Kandiurin held a banner with the label of the rail line’s former owner, Denver-based Omnitrax, over the fire, slowly letting the flames destroy the white and black symbol as a nearby crowd cheered.

“We are free,” she said Thursday. “We are not hostages anymore.”

The first train rolled into Churchill in more than a year on Wednesday evening to the surprise and excitement of residents.

Flooding in the spring of 2017 damaged the tracks and severed the only land link to the subarctic town of 900 people on the shore of Hudson Bay.

During the time the line was washed out goods and people had to be flown into Churchill and prices for groceries and fuel skyrocketed. The tourist economy in what’s known as the polar bear capital of the world was hit hard and some people left town.

The federal government provided $74 million to help buy and fix the railroad, along with the town’s port.

Trudeau said Omnitrax showed no interest in repairing the line, so it was important to shift ownership to the community and to those who shared a similar vision for the North.

The federal government has promised $43 million over 10 years to subsidize operations on top of the $74-million.

“With this new deal, Churchill will have full control over its future,” Trudeau said.

Today, we celebrated the return of rail cars to Churchill and the start of a new, brighter chapter for people in northern Manitoba. pic.twitter.com/IxzD8aWuQZ

Trudeau was greeted at the celebratory party by a few hundred people singing ‘O Canada.’

He thanked the people for their patience and said the wait is finally over—rail service will be back to normal by the end of the month.

“This is your victory,” he said. “I know times have been incredibly tough but the resilience and determination you have shown has been inspiring.”

As the first train announced its arrival with a blow of its horn, children gave up trick-or-treating and families left the warmth of their homes to greet it.

Valerie Schweder’s daughter Jada told her she heard the sound, but initially she didn’t believe it.

“We went down to the port to watch it roll down the track,” she said. “It was nice to see it again. It was almost like you wanted to cry.”

Schweder said many people felt stuck in the community because they couldn’t afford to visit family or go on a trip. At the same time, feeding her four children was becoming extremely expensive.

That stress lifted when the train rolled in. The horn signalled freedom and a future.

Music played, people danced, and the smell of burgers and bannock washed over the community’s downtown during the party.

Jennifer Azure was all smiles as she walked around with a few of her sled dogs. She said it’s been very difficult to maintain her dog sled business and bed and breakfast. One bag of dog food cost about $150, and that would barely last two days.

“Our dogs are really happy, as well as ourselves,” she said with a laugh.

“Our community has always really pulled together but it’s especially sweet now. We saw those first trains come down the tracks and it’s a good feeling. It gives us hope.”

Despite the sale, many people said they weren’t sure if the railway could be repaired before winter. Murad Al-Katib of the Arctic Gateway Group said 29 washouts were repaired in 35 days.

“We did that all together,” he said.

Mayor Mike Spence said it has been difficult but better times are ahead.

“We knew that once we got through this, we would be positioned for a greater, greater future, not just for us, but for Canada’s North.”