Federal Transportation Minister Marc Garneau said the bridge is "in good hands," even though a report found 2,500 irregularities linked to the bridge and another 500 linked to the highway portion of the construction 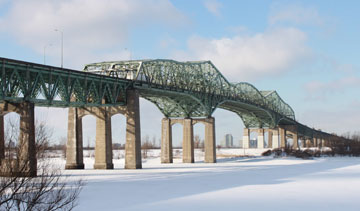 MONTREAL—The federal transport minister offered reassurances Monday a new Montreal bridge will be safe despite a published report that some 2,000 defects have been found in parts manufactured by a Spanish company.

Garneau stressed that the $4.2-billion bridge will be built within cost and is on schedule for next December.

“We’re working to speed up the schedule to meet the deadline,” he added.

The new structure, which spans the St. Lawrence River, is being built by the federal government to replace the crumbling Champlain Bridge.

A report in Le Journal de Montreal on Monday listed a number of defects: porous steel plates; incomplete or non-existent soldering; defective bolts; and several holes poorly aligned in parts that have to be bolted together.

But consortium spokesman Daniel Genest described the reported 2,000 defects as “a bit of a red herring.”

Genest said the project has 3,000 such anomalies, which could include “a specific repair or specific problem or a bunch of problems.”

But 75 per cent of them have already been resolved, he added.

McGill University’s Richard Shearmur said he is prepared to take the consortium’s word the problems will be fixed and he believes there’s no immediate danger when the bridge opens.

But the urban planning expert says he’s concerned about the longevity of the bridge, whose expected lifespan is 125 years.

“I don’t think there will be any concern about driving over the bridge in a year or two from now,” he said Monday.

“The concern will be in 30 or 40 years how is this bridge going to weather with all these patches and things?”

Shearmur said the whole point in building the new bridge is to avoid the shoddy construction of the first Champlain Bridge, which lasted about 50 years.

The new structure is being built by the “Signature on the Saint Lawrence” group, a consortium led by engineering and construction firm SNC-Lavalin.

“I know the SSL consortium is responsible for the next 30 years, but the bridge should last 125 years,” he said.

“Now does this mean that in 40 or 50 years time suddenly the federal government will have another bridge that needs rebuilding?”