U.S. plane maker beat street forecasts and hiked its delivery forecast for the year to 750 planes 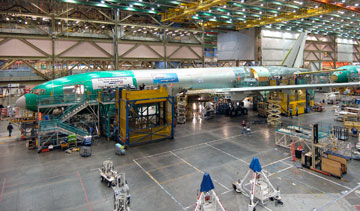 CHICAGO—Boeing’s third-quarter profit rose 34 per cent on lower taxes, and the company raised its forecast for 2016 earnings, revenue and airplane deliveries.

The Chicago-based company said that excluding one-time items and a tax-bases adjustment that had not previously been disclosed, it would have earned $2.81 per share. That beat the average forecast of 10 analysts surveyed by Zacks Investment Research, who expected $2.62 per share.

Revenue fell to $23.90 billion in the quarter but also beat the Zacks forecast.

Boeing said it expects full-year earnings from its core businesses to range between $6.80 and $7 per share, an increase of 70 cents to reflect the previously unannounced tax-basis benefit. It forecast revenue will be between $93.5 billion and $95.5 billion, an increase of $500 million from a previous prediction. Analysts were expected $94.01 billion, according to FactSet.

The company delivered 563 non-military planes in the first nine months of 2016, including 188 in the third quarter. While that pace is down slightly from 2015, the company still has a huge backlog of orders—more than 5,600 orders for planes with a combined list price of $409 billion. It added 107 orders in the third quarter.

Boeing expects to deliver 745 to 750 airliners this year, up five from its previous prediction.