When fuelled with hydrogen, the system reportedly offers more power and torque than diesel while helping to reduce emissions. 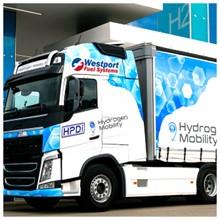 The company plans to display its H2 HPDI fuel system-equipped demonstrator truck at IAA Transportation 2022 in Hanover, Germany, from Sept. 20 to 25.

Westport designed the H2 HPDI for use in internal combustion engines. When fuelled with hydrogen, the system reportedly offers more power and torque than diesel while helping to reduce emissions.

According to the company, the H2 HPDI fuel system provides the following benefits:​

“We like to think of it as a game changer without the change. Our technology achieves better performance than diesel engines, with Near Zero CO2 emissions, all while utilizing existing manufacturing capital investment and infrastructure.”

In its announcement, Westport mentioned that the European Union has declared a 2050 deadline to achieve its goal of becoming carbon neutral. The company feels that  hydrogen fuel in the heavy-duty vehicle sector will play a substantial role in this decarbonization strategy.

According to European Commission data, about 20 per cent of the future overall transport fuel mix will be from H2 with an additional 20 per cent composed of low-carbon synthetic fuels derived from H2.