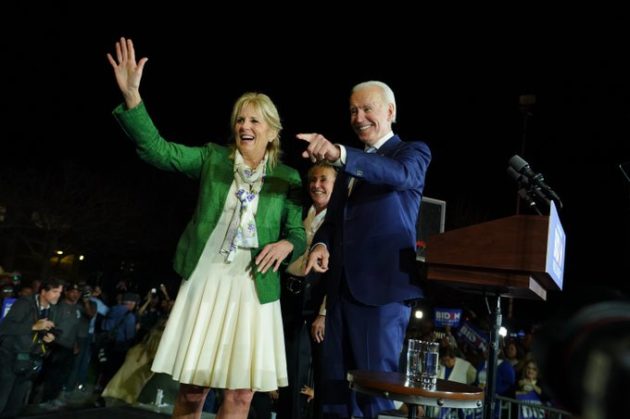 NEW YORK — Air Force One is mostly grounded. Fundraisers are cancelled. And the closest thing to a campaign rally is President Donald Trump’s nightly coronavirus briefing.

The president’s reelection campaign has been thoroughly upended by the coronavirus. But Trump’s team has revived a plan to quickly define Joe Biden, painting the presumptive Democratic presidential nominee as a Washington lifer, focusing on his links to China and insinuating that he is not up to the job.

Though the nation is fixated on the White House’s response to the pandemic, the Trump campaign is prioritizing attacks on Biden rather than selling the president’s handling of the crisis. Worried about declines in support in several battleground states, the campaign is using its financial war chest to try to drive down Biden’s standing by hammering his ties Beijing and, soon, reviving accusations that the former vice-president and his son are corrupt.

“This is a referendum on how the president handles the pandemic,” said Stephen Bannon, Trump’s former chief strategist. “It’s about making clear that Joe Biden is the worst possible guy for this time.”

The playbook was written months ago.

The Trump campaign would spend the first months of 2020 deploying its extensive social media outreach and some of the more than $170 million at its disposal to pummel his Democratic opponent. The shock-and-awe plan would be similar to the one President Barack Obama’s team executed in the spring of 2012 when it portrayed Mitt Romney as a heartless corporate raider, a label the Republican challenger never shook.

The campaign initially sought to define Biden as a corrupt Beltway insider after spending 40 years in Washington. But when COVID-19 reached America’s shores after ravaging China, campaign advisers decided to prioritize scorching Biden for his ties and past comments regarding that country, according to four people close to the campaign who were not authorized to publicly discuss the private deliberations and spoke on condition of anonymity.

It’s a risky strategy since Trump himself has faced questions about his approach to Beijing. But it’s one that the campaign hopes will tie Biden more closely to the pandemic, while also reinforcing his past support of free trade deals, which are unpopular in swaths of the Midwest that will be critical battlegrounds during the general election.

A scathing ad ran on television and on Facebook. America First Action, the principal super PAC behind Trump’s reelection effort, spent $10 million on ads in swing states juxtaposing old clips of Biden speaking favourably about China with allegations that Beijing “stole American manufacturing and hoarded our emergency stockpile.” And the message was amplified on Fox News and in other conservative media.

“The American people understood that we are in a hot information and economic war with China,” said Bannon, who hosts a radio show airing on conservative networks. “Biden was empowered and trusted by President Obama on his `pivot to Asia’ to handle China. He failed. The exacerbation of the problem with China came under Joe Biden’s watch.”

The Trump campaign touted the president’s January decision to restrict travel from China and, after periods of silence for fear of upsetting Chinese President Xi Jinping, his recent criticism of Beijing’s lack of transparency about the outbreak.

“On the other hand, Joe Biden has a big problem with China. Our internal data shows that Joe Biden’s softness on China is a major vulnerability, among many,” said Tim Murtagh, the Trump campaign’s senior communications director.

Some in Trump’s orbit, including senior adviser Kellyanne Conway, have argued against the China attacks in favour of highlighting the president’s leadership of the recovery. And Trump himself was presented ads making that attack, which were slated to run in a major media buy, but held off giving the authorization.

The Biden campaign has responded by pointing to inconsistencies with the president’s handling of China and the pandemic as a whole, which has killed more than 45,000 Americans and sent the economy hurtling toward a recession.

“Clever nicknames and tired attack lines he’s been workshopping the past year will not erase the magnitude of his failures during this crisis,” said TJ Ducklo, a Biden campaign spokesman.

China isn’t the only front from which the Trump campaign has levied assaults.

Twitter accounts run by the campaign and its allies have repeatedly shown clips of the 77-year-old Biden mixing up names and dates in interviews in an effort to suggest he’s not up for the job, an implication pushed by Trump himself with his “Sleepy Joe” moniker.

Moreover, some Republicans are eager to recycle some of Trump’s 2016 playbook, when he depicted Hillary Clinton as a Washington insider looking to enrich herself, by making similar accusations against Biden and his son, Hunter, for the younger man’s work in Ukraine and China.

Hunter Biden has not been charged with any wrongdoing. Even though Trump was impeached for pressuring Ukraine to investigate those very claims, his supporters are undeterred.

“The Trump campaign has the upper hand during this part of the cycle to define Biden and if they are not doing that now, they are wasting critical time,” said Sam Nunberg, a former Trump campaign adviser. “Biden wants to portray himself as the loyal public servant of many years who worked on behalf of the American people. Hunter Biden’s profiteering off his father shows cronyism and is fair game.”

Trump’s campaign is deeply concerned about losing support in several key states, particularly Florida, Wisconsin and Michigan. But Trump’s public approval rating has remained consistent nationally throughout his presidency and his unique brand of politics rooted in cultural grievances could once again overcome hurdles that would sink other presidents seeking reelection, especially if the pandemic wanes or the economy rebounds.

“Trump is doing what he always does: deflect and distract,” said Karine Jean-Pierre, a former Obama deputy campaign manager. “The problem is it doesn’t work when nearly everyone knows someone impacted by this crisis. Someone sick, someone who has passed away, someone who has lost a job. Picking an attack a day and hoping one of them will stick against Biden won’t change that equation.”