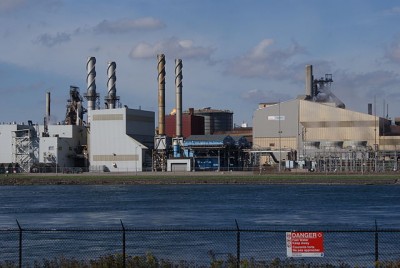 Essar Steel Algoma filed for creditor protection earlier this week. USW is now calling on Trudeau and Wynne to support the industry in “crisis.” PHOTO: Nowosielski, via Wikimedia Commons

TORONTO—The United Steelworkers union is calling on Prime Minster Justin Trudeau and Ontario Premier Kathleen Wynne to defend the country’s more than 100,000 steelworkers and pensioners who are threatened by a “deepening steel industry crisis.”

“Will this government continue its predecessor’s record of neglecting our industrial and manufacturing base, or will it take meaningful action to stand up for thousands of families whose jobs and pensions are at stake?” he asked.

“We need a similar response,” USW Ontario director, Marty Warren, said. “Canadian workers and pensioners are asking – Where are our governments? Why are they not defending our jobs and our communities?”

“Over the years, our governments told us that, with globalization we had to become more competitive, more efficient, that we had to think outside the box – and we’ve done that,” Mike Da Prat, president of USW Local 2251, which represents hourly workers at Essar Steel Algoma, said.

“But we also need fair trade rules because we have fixed costs for health and safety, for environmental protection, etc. Our governments continue to allow the dumping of cheap steel from countries that neglect health and safety, that pollute the environment and that violate human rights in their workplaces.

“We need Justin Trudeau to deliver on his promise of stimulating the economy and supporting fair trade,” Da Prat added.

Warren and Neumann also co-signed an open letter to Wynne last week, in which they demanded immediate action at the provincial level.