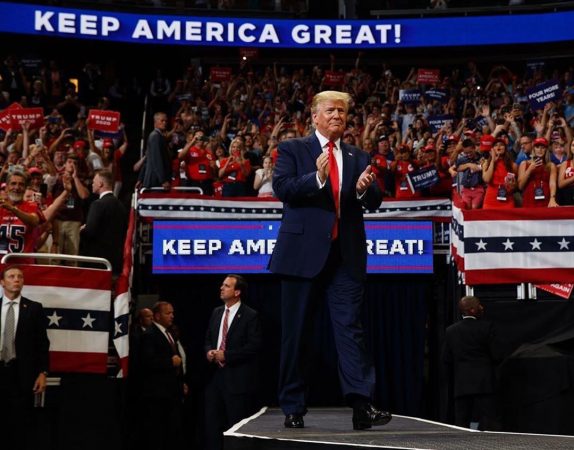 WASHINGTON — President Donald Trump’s legal team on Jan. 28 concluded its three-day presentation as they started it – arguing that the Democrats’ case amounted to partisan politics that would undo the results of the 2016 presidential election and drive Trump from office.

Trump’s lawyers argued forcefully against calling former national security adviser John Bolton as a witness, saying his yet-to-be-published manuscript contains unproven allegations that would be “inadmissible” during a typical trial.

As the defence used less than half its allotted 24 hours of argument, White House counsel Pat Cipollone said the impeachment trial “should end now, as quickly as possible.”

Meanwhile, Democrats and some moderate Republicans pressed to call Bolton and other witnesses as the case headed to the phase of questions and answers.

Highlights of the session and what’s ahead as senators conduct just the third impeachment trial of a president:

Impeachment “is not a game of leaks and unsourced manuscripts,” Sekulow said.

The argument was aimed at Republicans who are considering witnesses including Bolton, who writes that Trump told him that he wanted to withhold military aid from Ukraine until it helped with investigations into Democratic rival Joe Biden.

Sekulow stressed that much remains unknown about Bolton’s book, set for publication in March. Explosive allegations in a leaked manuscript have been disputed by Trump, the Justice Department and Vice-President Mike Pence’s chief of staff. The White House denies that the president directly connected the withheld military aid to investigations of Biden and his son Hunter, a former executive at a Ukraine energy company.

In a twist, some Republicans said they don’t trust Bolton, a fierce conservative and a darling of conservative media when he left the White House last year.

Sen. Rand Paul, R-Ky., called Bolton “disgruntled” and said he was seeking to make money off his White House service. Sen. John Cornyn, R-Texas, said, “I don’t think it sheds any new light on the facts.”

Democrats accused Republicans of protesting too much. “I don’t think, frankly, that we could have made as effective a case for John Bolton’s testimony as the president’s lawyers,” said Rep. Adam Schiff, D-Calif., the lead House prosecutor.

One of Trump’s former White House chiefs of staff, John Kelly, weighed in from Florida, telling an audience in Sarasota that he believes Bolton.

Several Republicans said they were impressed by an argument from Trump attorney and retired Harvard Law professor Alan Dershowitz, who said that nothing in the manuscript _ even if true — rises to the level of an impeachable offence.

“I thought Dershowitz did a good job,” said Sen. Mike Braun, R-Ind. ”When I listened to his sound logic and constitutional context, he said without equivocation” that Trump’s alleged action linking aid to investigations, if true, “does not rise to the level of impeachment.” Voters in his state want the Senate to move on, Braun said.

Most legal scholars dispute the idea that the Founding Fathers ever intended for impeachable offences to require proof of a crime.

A DEAL ON WITNESSES?

Republican Sen. James Lankford of Oklahoma, meanwhile, floated the idea — backed by South Carolina’s Lindsey Graham — to subpoena Bolton’s book manuscript so senators can see the evidence themselves in private.

Senate Democratic leader Chuck Schumer called the proposal “absurd” and noted that it would prevent Bolton from testifying in public.

Other Republicans, including Sen. Pat Toomey of Pennsylvania, suggested a trade that would bring in Bolton or another Democratic witness in exchange for one from the GOP side such as Hunter Biden or even Joe Biden.

“We’re not bargaining with them,” Schumer said. “We want four witnesses … then the truth will come out.”

VOTE NOT LOCKED DOWN

The flurry of ideas came as Senate Majority Leader Mitch McConnell told senators privately he does not yet have the votes to block new witnesses.

McConnell convened a closed-door meeting of GOP senators shortly after Trump’s legal team made its closing arguments. A Republican familiar with the meeting was not authorized to describe it by name and requested anonymity.

The GOP leader faced a handful of potential defections and put off a vote on potential witnesses until later in the week.

Fifty-one senators are needed to call more witnesses or include more documents. With a 53-47 majority, Republicans can only afford to lose three Republicans on such votes.

With opening arguments over, the case moved toward written questions, with senators on both sides getting 16 hours to pose them. A vote on witnesses was expected as soon as Friday.

Republicans were warned that even if they agreed to call Bolton to testify, the White House would seek to block him, a response certain to spark a lengthy court battle over executive privilege and national security.