April 22, 2019
by Michael Liedtke And Tom Krisher, The Associated Press

April 22, 2019
by Michael Liedtke And Tom Krisher, The Associated Press 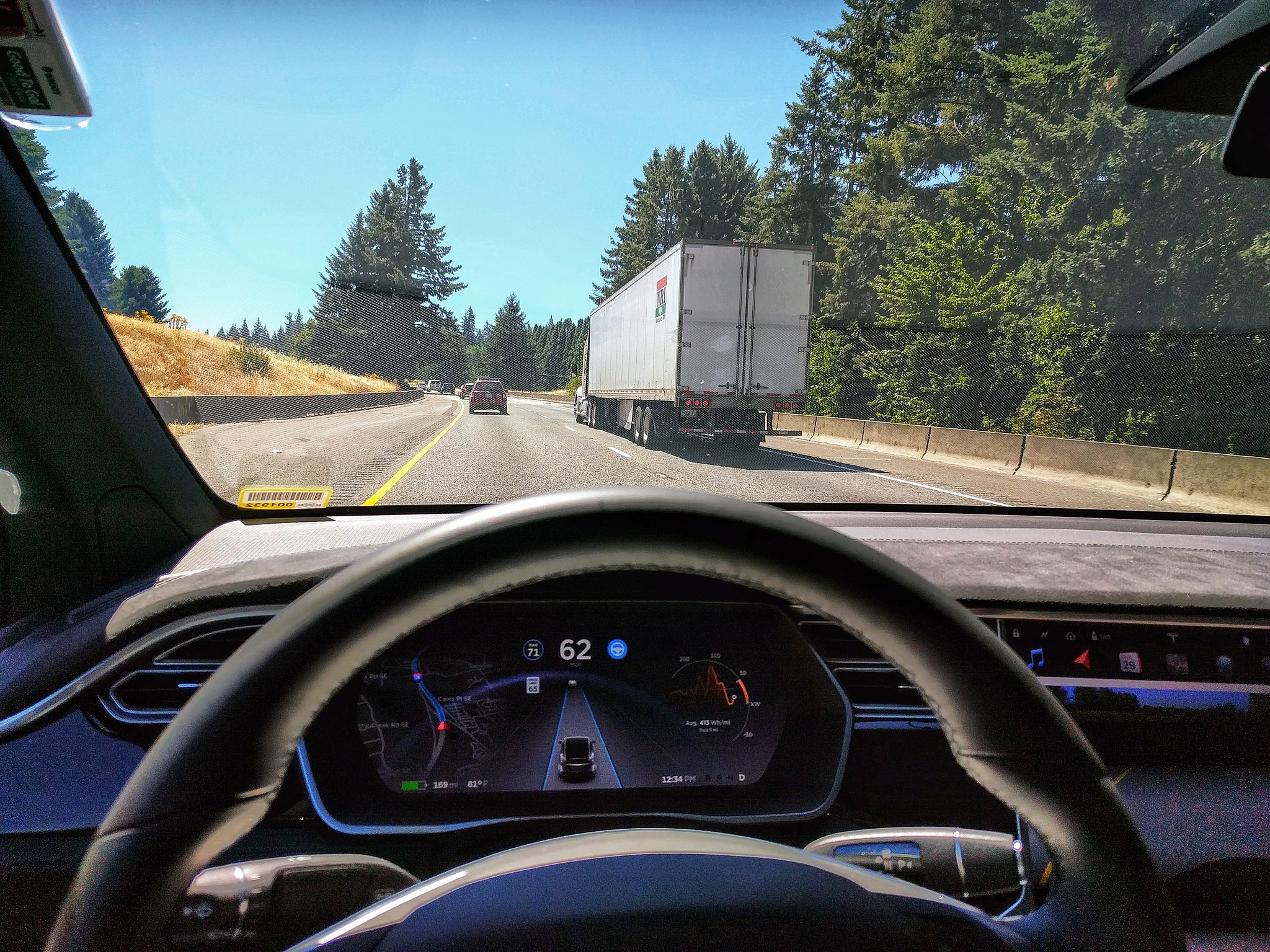 PHOTO: Driving in traffic with Tesla’s autopilot controlling distance from the lead car and centering the vehicle in the lane. Vehicle is a 2017 Model X 75D with dark interior/Ian Maddox

SAN FRANCISCO – Tesla CEO Elon Musk expects to start converting the company’s electric cars into fully self-driving vehicles next year as part of an audacious plan to create a network of robotic taxis to compete against Uber and other ride-hailing services.

The vision sketched out Monday during an event at Tesla’s Silicon Valley headquarters requires several leaps of faith—something that the zealous investors and consumers who view Musk as a technological genius often are willing to take.

But self-driving car experts fear Musk is shirking public safety in an effort to boost Tesla’s stock and sell more of the company’s electric cars. This amid lingering questions about whether the 15-year-old automaker can consistently make money.

“It sounds like a pipe dream that he’s selling people,” said Raj Rajkumar, an electrical and computer engineering professor at Carnegie Mellon University. “I think it’s basically overpromising, which is typical of Elon Musk.”

To prove his skeptics wrong, Musk will have to persuade regulators that Tesla’s technology for transforming potentially hundreds of thousands of electric cars into self-driving vehicles will produce robots that are safer and more reliable than humans.

And to do that, Musk will have to be correct in his bet that Tesla has come up with a better way to produce self-driving cars than virtually every other of the more than 60 companies in the U.S. working toward the same goal.

Some of those companies are aiming to have their fully autonomous cars begin carrying passengers in small geographic areas as early as this year, but many experts don’t believe they’ll be in widespread use for a decade or more.

Unlike most of those other companies, Tesla’s cars won’t come with the light beam sensors called Lidar that many industry experts consider to be essential equipment for robotic vehicles to navigate the road.

Musk trashed Lidar as a “fool’s errand” and “frigging stupid” in a putdown of companies such as Google spin-off Waymo and General Motors’ Cruise Automation that are including the light beam sensors in their systems.

“They are going to dump Lidar,” Musk assured investors and analysts gathered at Tesla’s Palo Alto, California, office for the 2 1/2 hour presentation.

Musk, widely known for his swagger as much as his smarts, spent much of the time trying to persuade both the investors and consumers that he had figured out a better way to teach robots how to drive.

“It is fundamentally insane to buy anything other than a Tesla,” Musk said at one point, arguing that purchasing a vehicle from any other automaker would be like getting a horse.

Musk’s quasi-sales pitch came two days before Tesla is expected to report a disappointing performance for the first three months of the year. Analysts polled by FactSet predict a US$305.5 million first quarter net loss based on disappointing car sales, a setback after Musk pledged heading into the second half of last year that Tesla would be profitable from that point onward.

From Musk’s vantage point, Tesla has a huge advantage over autonomous vehicle competitors because it gathers a massive amount of data in the real world. This quarter, he said Tesla will have 500,000 vehicles on the road, each equipped with eight cameras, ultrasonic sensors and radar gathering data to help build the company’s neural network, which will serve as the digital equivalent of the self-driving cars’ consciousness.

The network allows vehicles to recognize images, determine what objects are and figure out how to deal with them. To become fully self-driving, the cars also need a special computer that fits behind the glove box and is powered by a special chip Musk boasted is better than any other processor in the world “by a huge margin.”

Currently the self-driving computer costs $5,000, but the price rises to $7,000 if it’s installed after delivery.

Finally, Tesla will deliver software updates to those computers to make it possible for its electric cars to be driven by a robot, without a human in position to take over in case something goes awry. There will be a slight chance of some “fender benders,” Musk acknowledged Monday, and indicated Tesla will be liable for accident caused by a vehicle under the control of its robot.

“People will die,” Rajkumar predicted. “I can tell you that right now. Because in the real world, crazy things happen.”

Musk predicted that the technology for fully self-driving Tesla will roll out at some point from April to June next year. Then, Tesla will need to get regulatory approval for the fully autonomous cars to drive on roads, something Musk predicted would happen in a few states by the end of next year. He didn’t specific where Tesla will try to gain approval first.

California, Tesla’s biggest U.S. market, requires proof that fully autonomous cars can drive safely on public roads, but most other states aren’t as stringent. And experts say there’s no federal law requiring preapproval for fully autonomous driving, as long as a vehicle meets federal safety standards, which Teslas already do.

Within three years, Tesla will be manufacturing self-driving cars that don’t even have steering wheels or brake pedals in them, Musk said.

If they’re allowed on the roads, fully driverless cars would allow Musk to carry out his plan to expand into the ride-hailing market with a fleet of sleek Teslas. Owners of Teslas with the company’s self-driving computer could plug into an app-based network to pick up fare-paying passengers when they didn’t need to use their vehicle.

Musk theorizes that a ride-hailing service similar to Uber and Lyft will boost Tesla’s revenue and make it easier for the company to sell its cars to consumers who could effectively lower the cost of ownership by making money on the side. Tesla would get 20% to 25% of each fare in the network.

Tesla also intends to convert all the electric cars under leasing contracts to be turned into robotaxis upon their return.

Uber and Lyft also consider driverless cars to be one of the keys to making money from their still unprofitable services, but haven’t set a specific timetable for achieving that breakthrough while they continue to work on their own autonomous technology.

Waymo rolled out a ride-hailing service using self-driving vehicles late last year in the Phoenix area, but it only available to a small pool of passengers who were previously enrolled in a test program. And all the cars in Waymo’s ride-hailing service still have a human behind the steering wheel ready to take control.

The Waymo cars also have Lidar, something experts remain convinced must be part of any fully self-driving car, despite Musk’s colorful contentions otherwise.

“Vehicles that don’t have Lidar, that don’t have advanced radar, that haven’t captured a 3-D map are not self-driving vehicles,” Ken Washington, Ford’s chief technical officer, said during a recent interview with Recode. “They are great consumer vehicles with really good driver-assist technology.”