Clean energy startup Atlas Power Technologies has announced that its Centre of Excellence — currently under construction in Abbotsford, B.C. 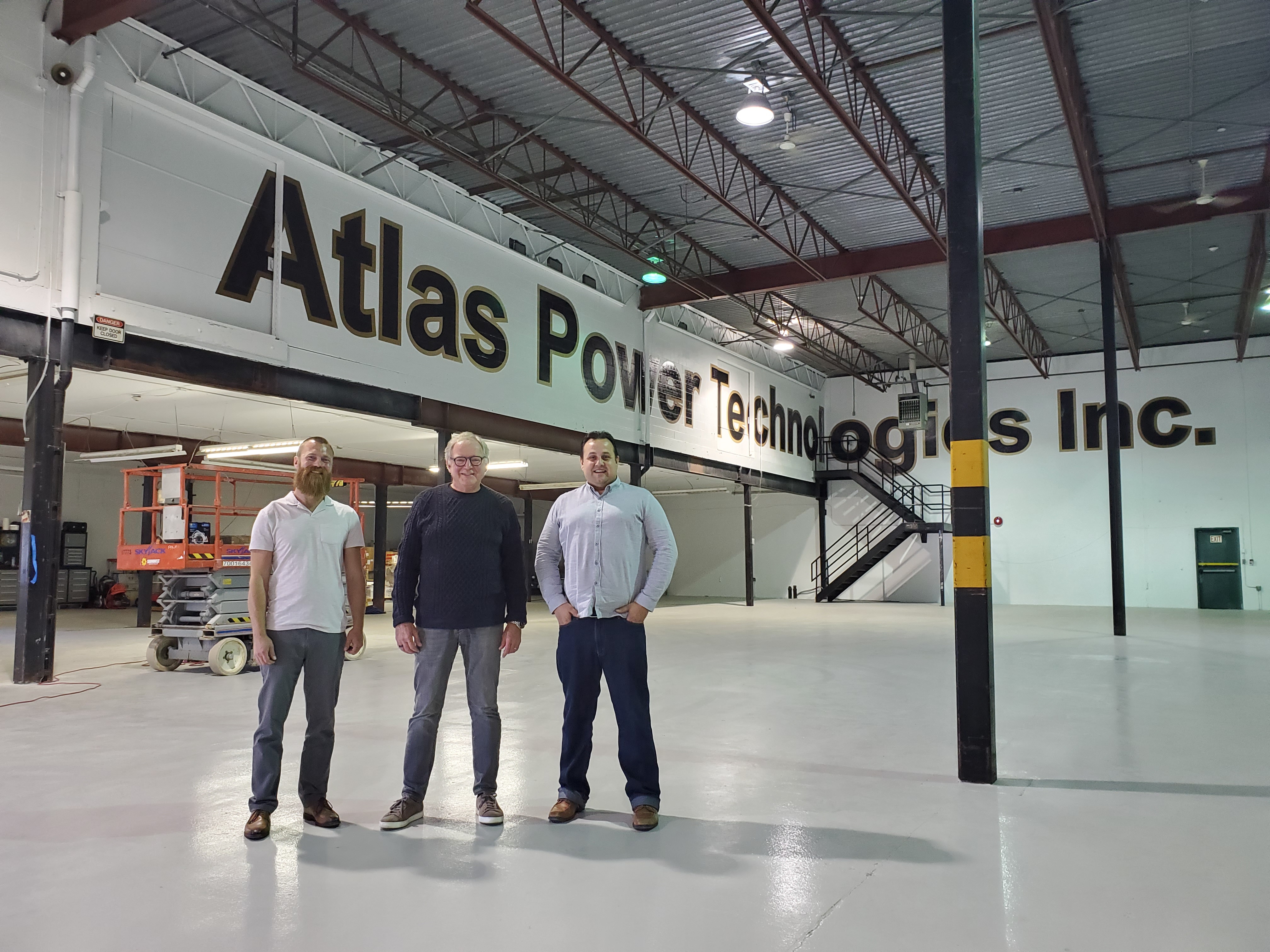 Pictured (from the left) are Atlas Power Technologies’ Dean Hedman, Director and Chief Construction Officer, Brooke Wade, Chairman of the Board of Directors, and Mitchell Miller, Chief Executive Officer and Director.

ABBOTSFORD — Canada will soon be getting its first sustainable supercapacitor manufacturing facility, helping to accelerate the transition to a renewable energy grid. Clean energy startup Atlas Power Technologies has announced that its Centre of Excellence — currently under construction in Abbotsford, B.C. — is on track to be up and running before the end of the year, bringing technology first developed at the University of British Columbia and in partnership with Canadian organization Mitacs.

Now, the company’s clean energy transition work — which culminated in the launch of Atlas Power Technologies in 2016 — is one of dozens of Canadian research projects highlighted in a new Innovation Trends video series, called Their World, Our Future, by Mitacs.

“We’re accelerating the clean technology transition timeline by taking the most mined products today, that nobody wants, and turning them into a high value, clean technology,” said Mitchell Miller, CEO of Atlas Power Technologies, explaining that the company’s secret sauce is a process that takes the most abundant materials in Canada — mined thermal coal and or petroleum coke, a byproduct of the oil sands — and refines them to make high-grade, activated carbon, which is a necessary component of supercapacitors.

An alternative to batteries, supercapacitors are electrochemical devices that rapidly charge and discharge energy, making them ideal to support a renewable energy grid. Up until now, however, the technology’s application has been limited by high cost and low performance, and that’s what Miller is hoping to address. “We’re solving one of the biggest challenges of the clean energy transition, which is ‘How do we store renewable energy, efficiently and cost-effectively?’” he said, explaining that his technology is suitable for large-scale grid, utility and commercial applications.

Miller started by establishing collaborations with highly-skilled researchers at Simon Fraser University and UBC with the help of Mitacs, eventually tapping into the Mitacs Indigenous Pathways program to hire student interns to advance his ideas. He says his Metis heritage is part of what drives him to find ways to add value to the world around him.

“When you think about renewable energy going onto the grid, the amount of energy storage we have to produce is enormous and there’s simply no clear path to get there with existing chemistries,” said Miller, explaining that competing storage technologies rely on scarce minerals such as nickel, cobalt, graphite and lithium, meaning new mines will need to be commissioned, a process that costs billions and will take decades to build.

“I get up every day knowing that if we do our job correctly, the world will be a better place for my kids and that’s a nice way to start the day,” he said

UBC Okanagan School of Engineering assistant professor Jian Liu is supervising the UBC team of Mitacs interns working on the project and says watching the technology transfer from the lab to a commercial product is extremely satisfying.

“We’re involved in many industrial collaborations and they don’t always get this far,” said Liu. “Not only did this project go better than I ever expected, but our partner is now building their manufacturing capability right here in Canada and that’s very important. They will be helping to grow the local economy and that’s much more important to me than the innovation itself.”