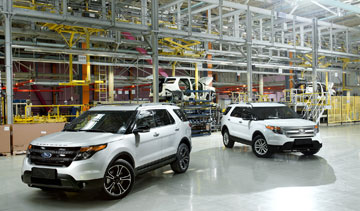 Workers at the Lear plant in Indiana make seats for the Ford Explorer SUV (pictured) and the Taurus sedan. PHOTO Ford

INDIANAPOLIS—Hundreds of workers protesting purported “fast-food-like wages” walked off the job September 15 at a Lear Corp. plant in northwest Indiana that makes automotive seats, beginning a strike that could slow production at a major Ford Motor Co. assembly plant in Chicago.

The Lear facility, about 45 kilometres southeast of Chicago in Hammond, employs 760 workers making seats for the Explorer and Taurus models produced at Ford’s Chicago Assembly Plant. The Ford plant could be vulnerable to any serious supply chain disruption because it operates on a just-in-time basis, meaning it receives parts mere hours before installing them in vehicles, rather than warehousing them on site.

The strike shut down the Lear plant, according to a statement from the United Auto Workers (UAW) union. All the plant’s workers walked off the job after two months of contract negotiations. About 200 workers wearing jackets and scarves or caps to ward off the chilly Midwest breeze were walking the picket line, said UAW Local 2335 vice-president Hanif Hassan, who has worked at the plant for 12 years.

The Associated Press left a phone message seeking comment from a Lear spokesman.

Workers say they agreed to a two-tiered pay system that capped wages at $16 an hour for newer hires as a way to help the company as it came out of bankruptcy, but that wages haven’t kept pace with the company’s recovery. Most of the workers at the plant are on the lower-tier wage level, Hassan said.

“The two-tier system allowed the auto industry to recover from that situation, and they have recovered. They’ve recovered well.” Hassan said.

Auto sales in the United States grew at the fastest pace in eight years in June, setting the industry up for a strong second half of the year.

“The goal here is to eradicate the second tier and bring everybody up to the same level,” Hassan said.

Some workers on the lower tier make as low as $11 an hour, while Hassan said upper-tier workers can earn nearly $20 an hour. Many fast-food workers do not make much more than the federal minimum wage of $7.25 an hour.

Now that the company’s financial picture has improved, workers say it should give back.

“We come in and do what we do and we do it well, so it’s time for us to be compensated like good workers,” said Lorenzo Jones, 29, who has worked at the plant for three years and says he has to juggle rent, utility and grocery bills to support his wife and three children on the $13 an hour he earns.

Jones said he works 40 hours a week and sometimes more. “I work a lot but when I get my check at the end of the week sometimes it doesn’t seem like it,” he said.