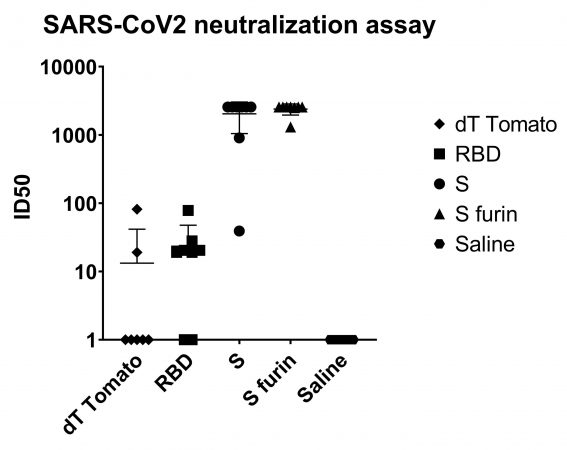 Figure 1 Neutralization titers from the wild-type virus assay: In this particular cell-based assay, the maximum value obtainable in this assay was 1:2560 which is the top dilution in the series. This value was obtained from the samples of 6 or 7 out of the 8 mice treated in both the S and S furin groups so the reported titers are a minimum of actual titers. PHOTO: Providence Therapeutics

The results demonstrate strong antibody responses against the spike (S) protein that were highly effective at neutralizing the virus in multiple assays. These responses were accompanied by T cell responses, indicating possible immunity.

“My lab has been working closely with Providence Therapeutics on potential COVID-19 vaccines using their mRNA technology. The results coming from our first animal experiment showed that the vaccines are resulting in a strong immune response,” said Ostrowski in a prepared statement. “In particular, the vaccine against the S protein produced neutralizing antibodies at higher titers than the results announced by other mRNA vaccine manufacturers.”

Brad Sorenson, President & CEO of Providence added, “It is tremendously satisfying to see the hard work of so many dedicated employees and collaborators coming together to produce a world-class vaccine right here in Canada. Now we reiterate our request to governments in Canada to support us as we move forward quickly into human trials.”

Providence Therapeutics evaluated three mRNA vaccine candidates for SARS-CoV-2. The study was designed to evaluate the immunogenicity and generation of neutralizing antibodies to SARS-CoV-2 of three mRNA vaccine candidates injected intramuscularly (IM) into C57BL/6 mice. The live phase of the study, as well as the T cell and clinical isolate neutralization assays, were run in the laboratory of Ostrowski at the University of Toronto and the antibody binding assays and pseudovirus neutralization assays were run in the laboratory of Gingras at Mount Sinai Hospital, Toronto. 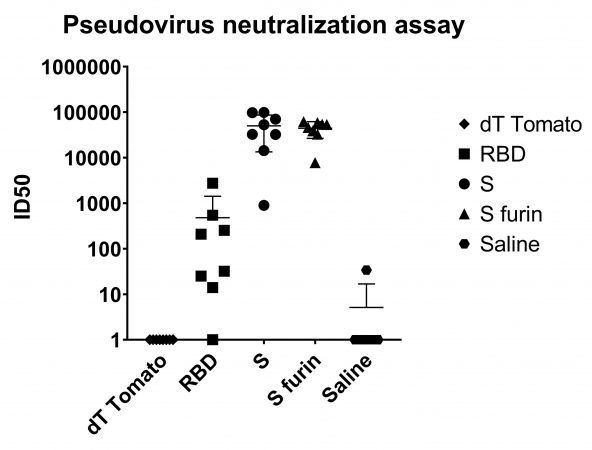 Figure 2 Neutralization titers from the psuedovirus assay: This assay is more quantitative as it is run on a luminometer. The top dilution in this assay was 24,400 and many samples were saturating the assay at that dilution. However, because of the quantitative nature of the assay, values higher than 24,200 could be extrapolated. PHOTO: Providence Therapeutics

Mice were dosed with either mRNAs encoding the receptor-binding domain (RBD) or two different full-length versions of the Spike (S) protein (one with a mutated furin-cleavage site). Control groups were dosed with an mRNA encoding a fluorescent protein (tdTomato) or saline. The mice were dosed at 20µg twice (three weeks apart) via IM injection. No adverse effects were observed. Three weeks after the second vaccine injection, all mice were euthanized and blood and spleen cells were harvested.

All three vaccinated groups of mice had positive interferon-gamma producing spleen cells when evaluated by ELISpot assay with an S protein library demonstrating the ability to elicit a T cell response. In order to determine the levels of neutralizing antibodies in the sera, two different neutralization assays were performed in a blinded fashion.

A strain isolated from a Canadian COVID-19 patient was used to infect Vero-E6 cells. Sera from individual animals was serially diluted. Sera from mice immunized with either one of the S protein candidates showed extremely strong neutralization activity. At the highest dilution tested, 6 or 7 of the 8 mice in each group showed 100% neutralization (Figure 1, see above).

Therefore, an exact neutralization titer (the dilution at which 50% of the virus can be neutralized) for these two groups could not be determined, but the immunized group showed only moderate neutralizing activity. Similarly, when the neutralization assay was performed using a pseudovirus (lentivirus expressing the SARS-CoV-2 S protein), the sera from groups of S protein immunized mice had extrapolated IC50 of 50,000 and 45,000. This assay has a readout from a luminometer, it is more quantitative and sensitive. Control groups sera had no neutralization activity.

These assays were developed to test COVID-19 patients’ sera and for comparison purposes, in the clinical isolate neutralization assay sera from approximately 30 convalescent patients tested to date have titers between 80-320.