A Chinese float glass manufacturer has committed to build its first North American site in Ontario; the project could create 400 new jobs 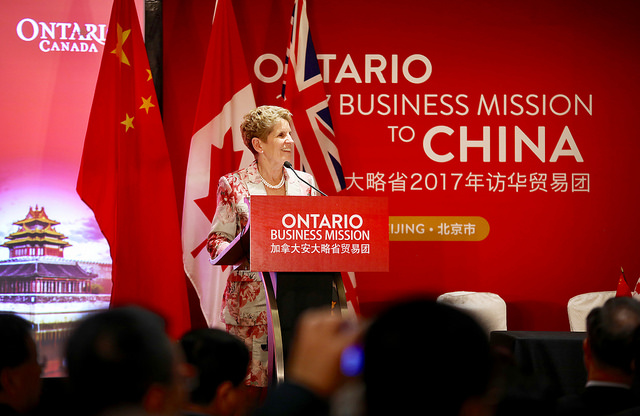 NANJING, China—Premier Kathleen Wynne’s trade mission to China has so far secured more than $1 billion in agreements between Ontario and Chinese companies.

The government says those agreements will create more than 1,100 jobs in Ontario.

Speaking from Nanjing, Wynne told The Canadian Press that these types of trade missions are important to build ties to other countries.

“At this point in our economic history, I think it’s even more important that we have relationships apart from the United States,” she said.

“They’re our No. 1 trading partner by a huge margin and we have to have other relationships if we want to thrive, particularly now with the uncertainty with the United States.”

Xinyi Glass Holdings has selected Ontario as the location for a large float glass plant—its first North American manufacturing facility, with a planned $450 million in investment that would create 400 jobs.

The other agreements include Shanghai Golden Wing Industrial opening up China’s East Territory as a market for Ontario-grown premium food ingredients and Dajiang Environmental Corporation setting up a subsidiary at McMaster Innovation Park to focus on research and technology development.

Wynne made the announcements Monday in Nanjing and said they ensure Ontario businesses can continue to innovate and grow in a rapidly changing global economy.

The premier is also travelling to Chongqing, Shenzhen and Hong Kong, then on to Ho Chi Minh City and Hanoi in Vietnam.

It is the first time an Ontario premier has led a trade mission to Vietnam, which did $3 billion in two-way trade with the province last year.

“I was surprised when I realized that … particularly because we have a pretty strong relationship with the Vietnamese-Canadian community,” Wynne said.

“We’re hoping to yes, have some deals signed, but it’s more of an initial introductory meeting and Vietnam is a growing market, so we want to make sure that businesses and government in Vietnam know that we are interested.”