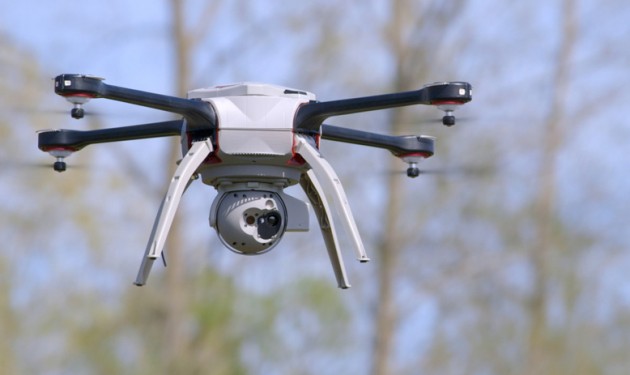 York Regional Police have been using their Aeryon SkyRanger as a security measure to ensure Pan Am Games venues are clear before fans attend events. PHOTO: Aeryon Labs

TORONTO—Pan Am venues in York Region have at least one spectator that’s not there to watch the games.

Before the athletes, coaches and droves of sports fans converge on events, York Regional Police are sweeping the areas with their Aeryon Labs SkyRanger. The unmanned aerial vehicle, or drone, which spans slightly more than 3-feet in diameter when in the air, is flying over sites to make sure they’re clear, and checking rooftops for any suspicious articles that could put people at risk.

Pan Am patrol is just one of the uses York police have found for their drone so far though, and according to David Proulx, vice-president of marketing at Aeryon Labs, customers finding novel ways to put their UAVs to work is nothing new.

York police unveiled the UAV earlier this month, and while its primary purpose with the law enforcement agency will be to map scenes of serious and fatal collisions, it will also be called on to assist in searching for vulnerable missing people who may have gotten lost in wooded areas, Const. Laura Nicolle said.

For crime scene mapping, investigators at YRP said they expect the drone will reduce road-closure times by up to 50 per cent, as the UAV is able to capture aerial images to be used in the detailed electronic mapping of a collision scene. Road closures after a serious or fatal collision can traditionally take eight to 10 hours.

With YRP unveiling their drone earlier this month, Aeryon’s list of Canadian law enforcement clients now includes YRP, RCMP, OPP and Halton Regional Police. The company said there are also numerous other agencies using Aeryon drones that have not been revealed publicly.

Despite the success, the Waterloo-based company feels it’s just getting started.

Aeryon thinks with the SkyRanger’s ease of use, as well as the diversity of tasks it and other drones like it can complete, the question about when UAVs are finally going to become ubiquitous, is over.

“There has been speculation in the market about when UAVs are going to become a broad-scale reality in the market,” Proulx said. “Our perspective is, it’s happening in a big way right now.”

For law enforcement applications in particular, Aeryon think the business opportunities are “huge.”

“I would not remove any size or type of law enforcement agency from the market opportunity,” Proulx added.

Aeryon touts its SkyRanger as small, transportable and easy to operate. Proulx noted that a two-day training course – with one day in-class and one in the field – is more than sufficient for an operator to become capable of flying the aircraft and executing specific missions independently.

“Flying an Aeryon SkyRanger through the map-based tablet control interface really is as easy as using Google Maps on your smart phone,” he said.

For a commercial-grade system a SkyRanger package can cost less than $100,000, while for military applications, the price tag can exceed that figure. The company’s pricing hinges on how a system is configured and for what application it’s being used.

Currently, the military sector makes up about half of Aeryon’s business, while the other half is split fairly evenly between public safety and policing, and commercial applications.