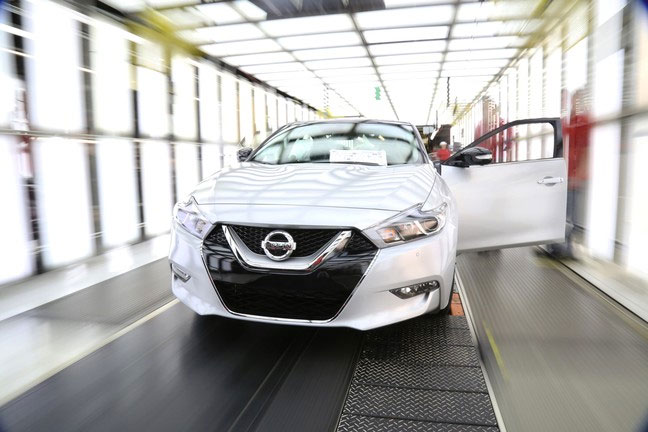 SMYRNA, Tenn.—Nissan launched the production of a redesigned version of its Maxima that the Japanese automaker hopes will revive struggling sales for its flagship sedan.

The introduction of the redesigned model comes amid decreasing sales trends for large sedans. While large cars made up 5 per cent of the U.S. new car market in 2000, they had dropped to just 2 per cent of the market last year, according to Ward’s AutoInfoBank.

They have been squeezed at one end by midsize cars that have become larger and more luxurious and on the other end by the increasing popularity of small SUVs.

Pierre Loing, the vice-president for product strategy and planning for Nissan North America, said there is room to grow in the large sedan segment with annual sales of about 650,000 cars a year that only a few manufacturers compete in.

“The segment is very volatile, and when you bring a very strong product it grows because those cars manage to catch customers from other segments,” Loing said.

“And for us, there is some cross-shopping on entry luxury,” he said. “Which when you’re a non-luxury brand you have to cherish that position.”

Loing said the Maxima competes with the large sedans like Chevrolet Impala, Toyota Avalon and could interest customers considering entry luxury models like the Acura TLX and to a lesser extent the BMW 3 series.

More than 8,400 people work at the Nissan plant that built 648,000 vehicles last year, making it the highest-producing plant in North America. The plant, which opened in 1983, makes the Altima, Maxima, Leaf, Rogue, Pathfinder and Infiniti QX60.

Nissan last month announced plans to build a new 1.5 million-square-foot logistics centre next to the plant by the end of 2017.

Nissan North America Chairman Jose Munoz has called the supplier park a key component in the company’s drive toward capturing 10 per cent of the U.S. market share.