The companies say that British sales of the BYD ADL Enviro200EV single deck bus and BYD ADL Envir400EV have accelerated as the UK works to meet its zero-emissions targets. 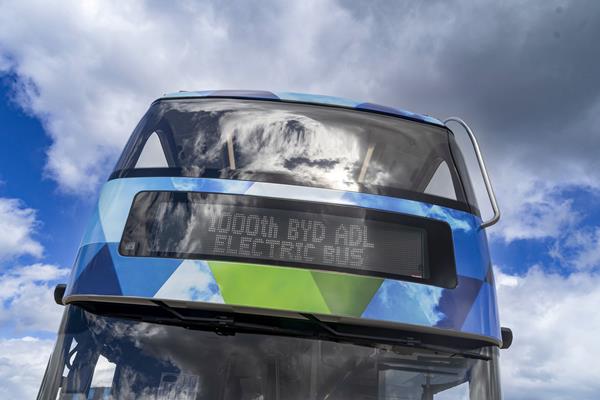 ADL and BYD UK say they have been working in partnership since 2015.

The Scottish government partially funded the BYD ADL Enviro400EV double decker, which was later handed over to Stagecoach Bluebird in Aberdeen during Scottish Bus Week before Scotland’s Minister for Just Transportation, Employment and Fair Work.

The companies say that British sales of the BYD ADL Enviro200EV single deck bus and BYD ADL Envir400EV have accelerated as the UK works to meet its zero-emissions targets.

“While it took five years to reach the 500th BYD ADL electric bus, the partnership has now delivered its 1000th vehicle just one year later,” read the company announcement.

This bus is reportedly the last of a fleet of 22 BYD ADL Enviro400EV double deck buses that Stagecoach bought for services in Aberdeen with financial support from the Scottish Ultra-Low Emission Bus Scheme. Stagecoach has since confirmed an order for an additional 13 electric buses of the same type for Aberdeen following the award of funding through the Scottish Government’s follow-on scheme, the Zero-Emission Bus Challenge Fund.

“Alongside free travel for under-22s and over half a billion pounds in long term funding for bus priority infrastructure, we’re putting buses at the heart of Scotland’s just transition to net-zero by helping people choose to travel more sustainably. We can only achieve that transition by working together,” said Minister for Just Transition, Employment and Fair Work, Richard Lochhead in a statement.