Alberta company vying to make solar a market standard, as customers get more comfortable with the concept 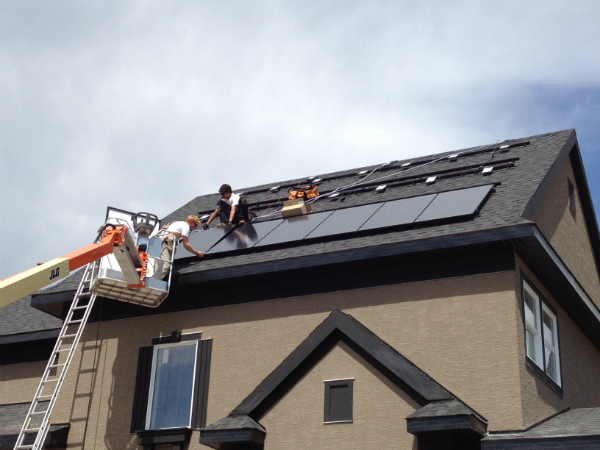 EDMONTON—Imagine buying an electric car that’s delivered to your doorstep … in a box. The box contains all of the car’s essential components, each one meticulously made. Later that day, the car company sends out its best mechanic to assemble everything for you.

This is how Landmark Group of Builders Ltd. CEO Reza Nasseri likens his company’s net-zero energy homebuilding process. Like an electric car, the net-zero concept has been quietly zooming along, turning heads right across Alberta.

Of course, nobody is getting cars delivered in boxes quite yet, but Landmark’s process is quite comparable to the car manufacturing process. These aren’t pre-fabricated homes in the typical sense. Landmark uses the term “panelization,” which refers to the preassembly of the home’s major components, not the array of interior and exterior details that give a home its individual look or character. Landmark ensures these details are done in the traditional, on-site building method.

These custom net-zero energy blueprints (net-zero meaning that the home produces as much power as it consumes) are drawn up behind-the-scenes at Landmark’s Edmonton manufacturing facility, which is currently under expansion. Then, a computer brings the blueprints to life through a precision saw that’s accurate to within one millimetre.

“When you build a house that way you know that every six inches there is a nail there. You can count on it, because it’s a machine that does it,” explains Nasseri, as he walks YouTube viewers through a video tour of the Landmark homebuilding process.

The precision saw is just one of a suite of robots at the facility, where Landmark practices what it calls “industrialized construction.” In 2012, the company cranked out 70 per cent of the most energy efficient homes in Alberta.

Headfirst into green
Landmark has been a major player in the homebuilding market since the 1970s—always with an eye for sustainability. Nasseri’s green building vision formed during a trip through Germany in the 1980s, but it wasn’t until 2012 that the company dove headfirst into the concept, aiming to cut material waste generation on the company’s end, as well as energy waste for consumers.

Now, the average Landmark home nets an Energuide rating in the mid 80s, while the Alberta average is closer to the mid 70s. The company’s goal is to have all of its homes reach net-zero status by the end of 2015.

In southwest Edmonton, Landmark recently introduced the city’s first net-zero community, Sparrow Landing. It encompasses a block of townhomes, the roofs of which are almost entirely solar paneled.

Home features like solar panels, high-efficiency furnaces and water tanks that draw in air for heat are just a few parts of the company’s customized net-zero approach that can produce affordable homes with 6.2 tonnes less greenhouse gas (GHG) emissions during the framing process alone, 55 per cent less than a conventionally constructed home. Innovations like these have helped the company win an array of accolades, such as the 2013 Clean 50 Award for Sustainable Homebuilding.

As much as preassembly saves money for the company and its consumers in Edmonton, Calgary and Red Deer, Alta., Landmark believes it also increases the quality of the build. For instance, each panel of the low-carbon footprint homes are sprayed with polyurethane foam insulation that reduces moisture penetration and energy waste while creating a powerful thermal resistant seal with an R-value of 6.5 per inch, arguably the highest rating on the market. While this is much more expensive than fibreglass insulation, the company says it’s evened out by the cost savings from the simplified manufacturing process. Plus, it’s an investment for future energy savings.

The benefits of preassembly are perhaps best illustrated in the company’s approach to window insulation. With robotic assistance, the backing and glass are perfectly placed, sometimes triple-paned, producing windows built to last, not begging for renovation.

Building without waste
Preassembly equals less waste, too. Landmark estimates that its manufacturing process generates 58 per cent less waste materials than a typical site-built home. Nasseri, an engineer who started the company under his own name in 1977, sees transportation as one of the most wasteful aspects of the typical homebuilding process. The framing process alone, he says, involves many back and forth trips to the work site. Doing much of that legwork indoors, he says, saves time and cuts GHG emissions.

Landmark’s vice-president of manufacturing, Curt Beyer, explains in an online video tour of the production facility that he takes pride in the company’s miniscule waste stream.

“What we really get excited about, is at the end of a shift, which has produced approximately seven floors for housing, we take away our waste in a bucket, not a truckload,” says Beyer.

Preassembly also makes for a faster build, reducing Landmark’s labour costs. In less than one work day, a Landmark crew can erect the home’s main exterior components. The complete ready-for-sale product can be finished in about five to six months, about half the time of a typical site-built home.

Landmark’s net-zero homes are not prohibitively expensive for the average Albertan. A 1,600 square-foot home can go for less than $400,000.

Solar is one of the key components for Landmark homes. A truly-outfitted net-zero home, of which Landmark has only built 21 so far, will typically have upwards of 30 to 40 solar photovoltaic roof panels. According to Landmark’s solar director, Kyle Kasawski, the high-quality panels usually come from Canada, China, the United States and Mexico.

“The solar cost is eliminated by the energy value,” says Kasawski.

Each Landmark home comes with a bi-directional meter that can keep track of energy usage, even allowing homeowners to sell excess energy back to the grid.

“You can produce energy during the day, then bank it,” says Kasawski.

Alberta has a good regulatory environment for solar; not to mention it’s the sunniest province in Canada. For Kasawski, that combination has made it easier to sell newbies on the concept of solar.

Landmark knows the typical Canadian couple looking to buy a new home may be more concerned about granite counters or hardwood floors, but the company prides itself in educating the consumer about the advantages—financial and environmental—of going green.

As it stands, Kasawski says many of Landmark’s customers are people in strong financial positions that want to live sustainably—much of the same demographic that drive electric cars. But Kasawski says that’s bound to change.

“Right now it’s an early-adopter market,” says Kasawski. “Can we move the customer to us? That’s the challenge. I think we can do it.”