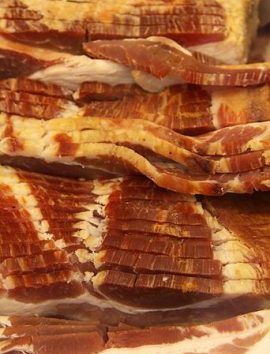 The investment in the bacon production line will boost output by eight million kilograms per year. PHOTO: Jonathunder, via Wikimedia Commons

Though the company has not released the full details of the project, the federal and provincial governments said July 19 that they are providing $500,000 to help fund a $5.9 million retrofit of the plant’s bacon production line—one part of the overall expansion project.

The installation of new packaging and processing equipment is expected to increase bacon output at the plant by eight million kilograms per year, as well as create 34 new full-time jobs, as well as 34 part-time positions.

“We appreciate the support from the Canadian and Manitoba governments, which played a direct role in helping our company to create and sustain high skilled jobs here in Winnipeg and value-added export opportunities globally,” Rory McAlpine, senior vice-president of Government and Industry Relations at the Mississauga, Ont.-based company, said.

The expansion of the bacon production line will help Maple Leaf export more of the lucrative pork product to international markets.

The company plans to finish work on the project later this year.