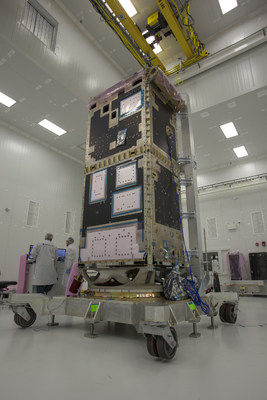 TORONTO—Magellan Aerospace has delivered the structure for the first two payload modules for the Canadian Space Agency’s 2018 RADARSAT Constellation Mission to MacDonald, Dettwiler and Associates Ltd., one of the mission’s prime contractors.

The payload modules, which were designed and built at Magellan Aerospace’s Winnipeg facility, are structural assemblies that will house the electronics for the radar payload being developed by MDA. The RADARSAT project’s main objectives will be to provide Maritime surveillance, disaster management and ecosystem monitoring,

“The RCM contract has a challenging schedule,” Phil Underwood, president and CEO of Magellan Aerospace, said. “Magellan’s ability to deliver the payload module structures on-time, and to our customer’s specifications is crucial to the success of this important Canadian satellite mission.”

“The spacecraft buses that Magellan is manufacturing for RCM are significantly larger than the buses that have been provided for previous Canadian space missions and Magellan has invested in a new Advanced Satellite Integration Facility in Winnipeg that will be large enough to accommodate the simultaneous build of three satellite buses,” he added.

In addition to the deliveries, Magellan has also completed a structural modal test at its Winnipeg facility. The company said the test is a key milestone that verified the structural design of the spacecraft.

“The structure responded as the simulations predicated, confirming that Magellan’s design will meet the demanding launch environment of the rocket,” the company said.