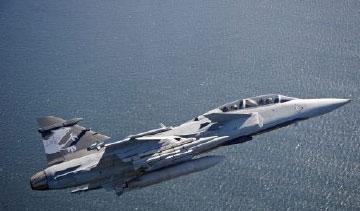 DUBAI, United Arab Emirates—Global military spending rose in 2015 to nearly $1.7 trillion, the first increase in several years, driven by conflicts including the battle against the Islamic State group, the Saudi-led war in Yemen and fears about Iran, an April 5 report shows.

The study by the Stockholm International Peace Research Institute also noted that the Chinese expansion in the South China Sea and Russia’s annexation of Crimea and support of Ukrainian separatists also accounted for nudging spending up one per cent in real terms, compared to 2014.

For weapons manufacturers, the nonstop pace of airstrikes targeting Islamic State fighters in Iraq and Syria, as well as Saudi-led bombing of Yemen’s Shiite rebels and their allies, means billions of dollars more in sales.

The United States, with $596 billion in defence spending, and China, with an estimated $215 billion, led all countries in 2015, the annual report by SIPRI said. Saudi Arabia, however, came in third with spending of $87.2 billion _ double what it spent in 2006, according to the report. That fueled the first worldwide increase in military spending since 2011.

Iraq spent $13.1 billion on its military in 2015, up well over 500 per cent from 2006 as it has rebuilt its armed forces following the U.S. withdrawal and rise of the Islamic State group, SIPRI said.

While part of the U.S. coalition fighting the extremists, Saudi Arabia also launched a war in Yemen in March 2015 to support the country’s internationally recognized government after Shiite rebels known as Houthis earlier overran the country’s capital, Sanaa. The Sunni kingdom views the Houthis as a proxy of Shiite-dominated Iran, long its regional rival.

The United Arab Emirates also is taking part in both conflicts and likely has spent billions of dollars to support its military in 2015 as well, though the Stockholm-based institute said it couldn’t offer precise figures this year, senior research Pieter Wezeman said. Both the UAE and Saudi Arabia also sent troops into Bahrain to put down its 2011 Arab Spring-inspired protests.

“This clearly is a reason for these countries to improve their so-called security forces, both to be able to fight against internal uprisings, whether a more-peaceful nature or more violent, but also of course to intervene in neighbouring countries,” Wezeman, who took part in the report, told The Associated Press.

But the air campaign waged by the Saudi-led, U.S.-backed coalition in Yemen has been increasingly criticized by human rights activists over civilian deaths. Airstrikes account for 60 per cent of the 3,200 civilians killed in the conflict, according to the United Nations, which has criticized coalition strikes that have hit markets, clinics and hospitals.

Yet arms deals continue, especially from the U.S. Asked about the civilian casualties, State Department spokesman David McKeeby said the United States remained “deeply concerned by the devastating toll of the crisis in Yemen.”

“We have remained in regular contact with the Saudi-led coalition and have reinforced to them the need to avoid civilian casualties and the importance of precise targeting,” McKeeby said in a statement. “We have encouraged them to investigate all credible accounts of civilian casualties as a result of coalition strikes _ and to report publicly the results of these investigations.”

But both the Yemen war and the fight against the Islamic State group likely will keep arms manufacturers busy into 2016. Companies that may see increased sales include Boeing. Co., General Dynamics, Lockheed Martin Corp. and Raytheon Co., aerospace and defence analyst Roman Schweizer at Guggenheim Securities wrote March 28.

“We have been bullish for the better part of a year that the Pentagon and its European and (Gulf) allies will have to refill their stocks of missiles and munitions due to the current campaign against ISIS in Iraq, Syria, Yemen and even Libya,” Schweizer wrote, using an alternate acronym for the extremist group.

Meanwhile, President Barack Obama promised America’s “ironclad commitment” to back its Gulf allies during a summit last May. In the time since, the U.S. has made $33 billion in arms sales to its Gulf allies, including an $11.25-billion deal with Saudi Arabia that includes four armed warships to modernize its navy, McKeeby said.

But the Obama administration has been criticized by U.S. Sen. John McCain, an Arizona Republican, for “failing to live to up the promises” made at the summit by allegedly stalling fighter jet sales to both Kuwait and Qatar.

“They are languishing on the shelf gathering dust,” McCain said at a hearing on March 8. Tiny Qatar in the meantime has signed a deal for 6.7 billion euros ($7.6 billion) to buy 24 Dassault Rafal fighter jets from France.

Obama will visit Saudi Arabia on April 21 for a meeting of the Gulf Cooperation Council, which includes Saudi Arabia, Bahrain, Kuwait, Oman, Qatar and the UAE. The jet sales likely will be a topic of discussion, as will Iran after its recently implemented nuclear deal with world powers.

Wezeman said international sanctions against Iran had seen its weapons technology lag behind its neighbours as its military spending dropped by 30 per cent between 2006 and 2015. However, he acknowledged regional suspicions likely would keep Gulf military spending strong.