There is no product allocated to the Oshawa plant past December 2019, said Unifor. The Oshawa facility is the only Canadian plant that's set to close 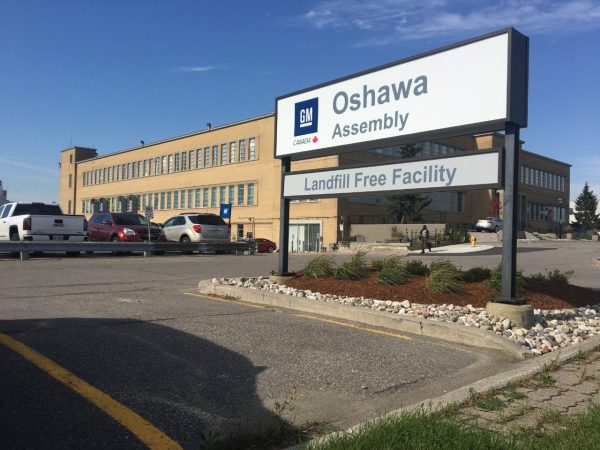 TORONTO—General Motors will close its production plant in Oshawa, Ont., along with four facilities in the U.S. as part of a global reorganization that will see the company focus on electric and autonomous vehicle programs.

The auto manufacturer announced the closures as part of a sweeping strategy to transform its product line and manufacturing process in order to meet changing demand in the transportation industry, a plan that it says will save the company US$6 billion by the year 2020.

“This industry is changing very rapidly, when you look at all of the transformative technologies, be it propulsion, autonomous driving… These are things we’re doing to strengthen the core business,” GM chief executive and chairman Mary Barra told reporters on Monday. “We think it’s appropriate to do it at a time, and get in front of it, while the company is strong and while the economy is strong.”

GM also says it will reduce salaried and salaried contract staff by 15 per cent, which includes 25 per cent fewer executives.

The US$6-billion in savings includes cost reductions of US$4.5 billion and lower capital expenditure annually of almost US$1.5 billion, GM said.

This morning, dozens of workers were seen walking out of the Oshawa Assembly Plant, with some saying they were very unhappy with news of the planned closure.

Related: Workers stream out of GM Oshawa plant amid reports of planned closure

Unifor, the union representing more than 2,500 workers at the plant, says it has been told that there is no product allocated to the Oshawa plant past December 2019.

Unifor Local 222 shop chairman Greg Moffatt said Monday the plant is not closing “without the fight of our lives.”

GM is also closing the Detroit-Hamtramck Assembly plant in Detroit and the Lordstown Assembly in Warren, Ohio in 2019. GM propulsion plants in White Marsh, Maryland and Warren, Michigan will also be shut.

On top of the previously announced closure of the assembly plant in Gunsan, Korea, GM will also cease the operations of two additional plants outside North America by the end of next year.

Meanwhile, GM will be investing heavily in autonomous and electric vehicle technology, said Barra. The raft of changes announced on Monday will not impact GM’s new fullsize trucks and SUVs, which are “doing very well in the marketplace,” Barra told reporters.

The Oshawa plant, however, has been producing an older model, she said.

“Oshawa is building the previous generation trucks that are very helpful in the crossover period… As we’re transitioning to the new truck architecture,” she said.

Ontario Premier Doug Ford said it was a “difficult day” for the Oshawa plant workers, Ontario auto part suppliers and their families. The provincial government has begun exploring measures to help impacted workers, businesses and communities cope with the “aftermath of this decision,” including a training program to help local workers to regain employment as quickly as possible, Ford added.

“It is disappointing that GM failed to see and build upon this competitive advantage,” said Ford in a statement on Monday. “While the company is entitled to make its own business decisions, I am confident that history will prove them wrong.”