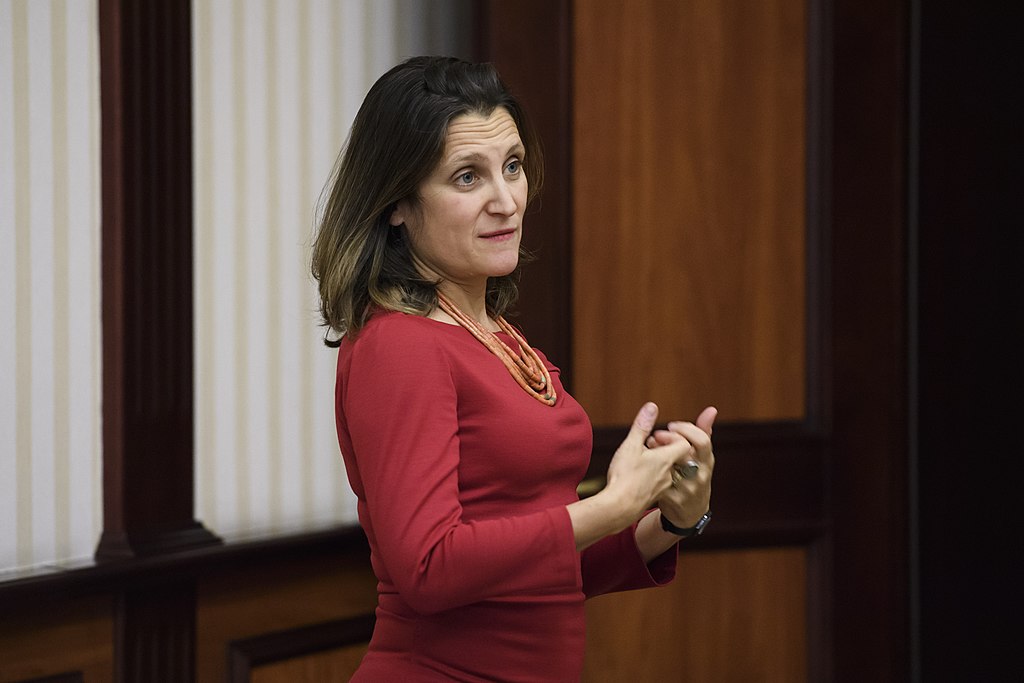 OTTAWA — Finance Minister Chrystia Freeland is expected to continue playing a key role in managing Canada’s relationship with the United States as the two countries look to restart their pandemic-ravaged economies.

The Liberal government isn’t saying whether Prime Minister Justin Trudeau will officially direct Freeland, who is also deputy prime minister, to continue serving as Canada’s point person with the U.S., a role she has held for more than three years.

The prime minister first tapped Freeland to lead the federal government’s efforts in his mandate letter to her when she became foreign affairs minister in February 2017, and again when she was named deputy prime minister last fall. She had also been involved in that file when she was international trade minister, her first cabinet role.

Foreign Affairs Minister Francois-Philippe Champagne this week suggested other federal cabinet ministers will shoulder more of the burden as Freeland assumes her new duties, but added the final decision rests with Trudeau.

“We work as a whole of government to make sure that we best position Canada in that crucial relationship between Canada and the United States,” he told The Canadian Press in an interview.

“We will continue as we were doing and then the particular allocation, obviously that’s the prerogative of the prime minister. But I would say more generally, I think each and every one of us has a role to play in that very important relationship.”

Senior government sources would not speak on the record this week when asked whether Freeland will continue to be front and centre or whether other ministers — notably Champagne and International Trade Minister Mary Ng — will manage the file.

Speaking on the condition of anonymity, those sources offered mixed messages.

Former Canadian diplomat Colin Robertson said Freeland’s many contacts in the U.S., understanding of the American culture after having lived there as a journalist for years and her ability to make friends out of enemies served Canada well on the file.

It also helped shield Trudeau from Trump’s wrath when Ottawa wanted to push back on an issue, Robertson said, noting how Freeland only earlier this month blasted the White House’s decision to impose new aluminum tariffs on Canada.

“She was very sharp,” said Robertson, who is now vice-president of the Canadian Global Affairs Institute. “And I thought: ‘This is right. It’s exactly the right tone. But you don’t want the prime minister to do it because Trump is going to take offence.”’

Scotty Greenwood, CEO of the Canadian-American Business Council, nonetheless suggested there is some sense in reverting to the more traditional approach where no single minister is in charge now that the free trade talks are over.

“Because the relationship is so big and multifaceted, lots of people end up interacting with the U.S.,” Greenwood said.

“People were probably just sort of going through her or co-ordinating so nothing could inadvertently mess up the negotiation. But the negotiation is done.”

Whether Freeland remains the lead minister or not, both Greenwood and Robertson believed she will continue to play a big role in her new position, which will include leading the restart of Canada’s pandemic-ravaged economy.

They say that is because the Liberals’ plan for restarting the Canadian economy — including a heavy emphasis on tackling inequality and climate change — will require close co-ordination with the U.S., given the integrated nature of the two economies.

“The biggest bilateral task is going to be the economic rebound,” said Greenwood. “So she will play an important role.”

Robertson echoed that assessment, saying: “Based on what the prime minister, in terms of his reset and his green shift and ‘build back better,’ none of this will work unless we do this in tandem with the U.S.”