The F-150 Police Responder is capable of speeds up to 100 mph and boasts more horsepower and torque than any other pursuit-rated police vehicle. Ford says it is ideal for off-road patrol situations 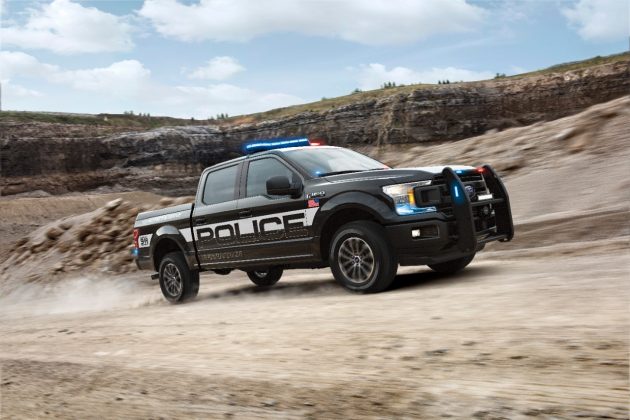 Ford Motor Co. is bringing to market the industry’s first pursuit-rated pickup, the 2018 F-150 Police Responder, which it says will give law enforcement agencies a more versatile and capable patrol vehicle.

The truck offers 375 horsepower and 470 lb.-ft. of torque—which Ford asserts is more than any other pursuit-rated police vehicle.

To earn a pursuit rating, cars have to perform well in acceleration, handling, braking, top speed and ergonomics. In other words, a vehicle needs to stand up to the rigours of policing duties.

Ford says this truck has the largest passenger volume, payload and towing capacity of any pursuit-rated police vehicle as well.

Based on the F-150 FX4 off-road model, the Police Responder’s 145-inch wheelbase sits on a steel frame and features Ford’s aluminum-alloy SuperCrew body.

A 240-amp alternator is included to support on-board electrical devices, along with a police-calibrated speedometer, and engine hour and engine idle hour meters.

The truck is fitted with underbody skid plates to protect it from curbs and rough terrain, and it is equipped with a standard class IV hitch—which Ford says gives the Police Responder best-in-class towing capability of 7,000 pounds.

The interior is upfit-ready and it features a column shifter, heavy-duty cloth front seats with slim bolsters and anti-stab plates, vinyl rear seating and heavy-duty vinyl flooring—easy for cleanup.

Tyler continued, “Aside from its industry-first on-road pursuit capability, this purpose-built pickup can comfortably seat five, while providing capability in off-road patrol situations for officers in rural environments patrolled by sheriff’s departments, border patrol operations and the Department of Natural Resources.”

The F-150 Police Responder will join Ford’s diverse line of law enforcement vehicles, the broadest in the industry, this fall. Ford sells more police vehicles in the U.S. than any other automaker.

Ford says it offers the right vehicles for a variety of law enforcement needs.