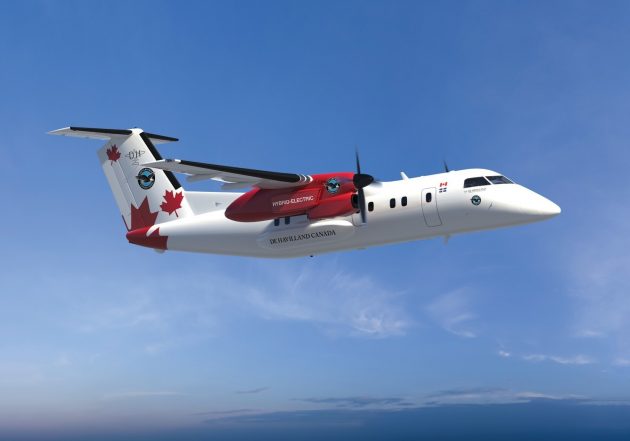 TORONTO — On Jul. 15, De Havilland Aircraft of Canada Limited announced that the company is working with Pratt & Whitney Canada, a business unit of Pratt & Whitney, to integrate hybrid-electric technology into a De Havilland Canada Dash 8-100 flight demonstrator. The flight demonstrator will include an advanced electric motor and controller from Collins Aerospace. As announced by P&WC earlier on Jul. 15, the hybrid-electric propulsion technology and flight demonstrator program is part of a $163M CAD investment, supported by the governments of Canada and Quebec. Pratt & Whitney and Collins Aerospace are businesses of Raytheon Technologies Corp.

The new hybrid-electric propulsion technology hopes to drive significant improvements in aircraft efficiency by optimizing performance across the different phases of flight, allowing the demonstrator to target a 30% reduction in fuel burn and CO2 emissions, compared to a modern regional turboprop airliner. P&WC will target ground testing in 2022, leading to flight testing of the Dash 8-100 demonstrator in 2024.

“Pratt & Whitney Canada is proud to be part of Canada’s green recovery plan and to be collaborating with De Havilland Canada in the development of the hybrid-electric propulsion technology by utilizing a Dash 8-100 regional aircraft as our flying demonstrator,” said Maria Della Posta, President, Pratt & Whitney Canada. “Hybrid-electric technology holds considerable potential to drive the next step-change in efficiency for aircraft engines, while contributing to the development of the industry’s workforce, economic growth and innovation.”

“Canada has an opportunity to demonstrate environmental leadership in the aviation sector,” said Dave Riggs, Chief Transformation Officer, De Havilland Canada. “De Havilland Canada has a legacy of innovation that has supported aviation in Canada and around the world for more than 90 years and we are immensely proud to be the first manufacturer of regional aircraft supporting the development of hybrid-electric propulsion technology. We look forward to collaborating with Pratt & Whitney Canada and governments in Canada to further the development of alternative, climate-friendly aircraft that hold much potential to contribute to more sustainable aviation.

De Havilland Canada’s teams reported excitement about the ongoing research and development efforts to decarbonize aviation and are participating in numerous investigations regarding the development of new propulsion technology options that will likely shape the future of aviation. De Havilland Canada has had discussions with many parties on the “greening” of aviation and is keen to see the aviation industry explore more electric viability.