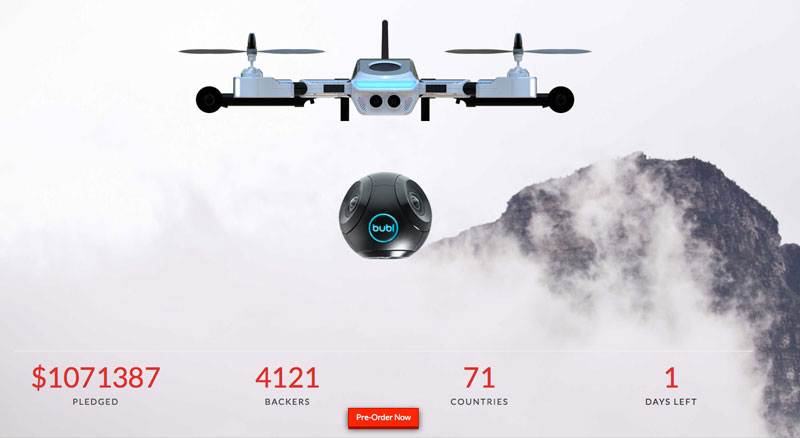 This screen capture of Plexidrone’s crowdfunding effort shows the campaign has far exceeded its $115,000 target

TORONTO—There was $1.3 million raised for high-fidelity wireless speakers, almost $1.2 million for specialty drones and $820,000 for smart-bikes.

In 2014, three tiny Canadian companies went from teetering in obscurity to making headlines on tech blogs around the world thanks to successful crowdfunding campaigns that spurred exponential growth almost overnight.

Once the domain of hobbyists and tinkerers, crowdfunding is increasingly becoming a growth strategy for real—but still small—companies with big ideas.

“An older paradigm about crowdfunding was four guys in their garage who couldn’t find money any other way,” said Steve Tam, a marketing manager with Indiegogo Canada.

“Now we’re seeing an increasing number of companies who are either already in market or have a very validated product and are using crowdfunding as a part of their marketing and fundraising campaigns or to access international markets.

“This is a really cool place for people to find new ideas and concepts.”

Mass Fidelity, headquartered just east of Toronto, turned to Indiegogo earlier this year. The company sought about $55,000 to help get its Core wireless speaker system from the prototype stage into production.

“We considered it a bit of a get-the-word out exercise. We were a small company no one had heard of based in sleepy old Toronto. It was the ability for us to make a sales pitch to a much wider audience than we normally could,” said co-founder Neil D’Souza.

To the Core team’s astonishment, the modest crowdfunding campaign raised more than 25 times what the company was originally seeking, eventually surpassing $1.3 million.

The second most successful crowdfunding campaign in Canada this year was for the PlexiDrone, targeted at photographers and videographers, which raised $1.17 million after setting a goal of about $115,000.

“We could’ve spent $2 million on PR and marketing and we would not have gained the worldwide exposure that we have,” said Klever Freire, chief executive of DreamQii, the company that created the PlexiDrone.

Freire had some concerns about competing with countless other drone products on Indiegogo and rival crowdfunding platform Kickstarter, including many that were very early in their development stages. But he was confident that the Indiegogo community would respond to the fact that the PlexiDrone was a far more polished product almost ready to be manufactured.

“You could say it’s a saturated market to some extent, but there are a lot of people who are making money just from building custom products for a small number of end users where they’re not really thinking about the larger-scale picture and the regulatory aspects of it,” he said.

“Our background is in aerospace engineering so from Day One we went out and we met with Transport Canada and the Federal Aviation Administration, we got special flight operating certificates in Canada. We’re working with the FAA on allowing people to use the PlexiDrone commercially as well for film and photography. So we’re thinking ahead of the game in a couple of dimensions.”

The third most successful Canadian campaign was for the Vanhawks Valour smart-bike, which offers riders turn-by-turn navigation, blind spot detection technology, and digital tracking of trips. More than $820,000 was raised to get the bike into production.

Both Freire and D’Souza said they only expect crowdfunding to grow as a trend next year.

“I certainly see it as something that’s here to stay _ people assumed that eBay would go the way of the dodo too after free local online classifieds came around,” D’Souza said.

If anything, Freire said he’s concerned that crowdfunding might get too big and overrun with campaigns launched by large companies.

“The one thing that I worry about is that it’s going to become a platform for larger companies that are already well established to come in and use their funding for better marketing, better PR and it’s going to be easy to exploit and take away from the spirit of what crowdfunding currently is,” Freire said.

Tam said he’s heard those concerns but thinks it would only help small companies if huge corporations also used Indiegogo and Kickstarter. He feels it would further legitimize the crowdfunding concept and lead to more consumers supporting start-up companies.

“Tech companies understand that big companies coming in and playing in this space is not necessarily taking anything away from them, if anything it’s bringing credibility and it’s bringing public awareness,” Tam said.

“Companies who are crowdfunding their products know that they’re not in competition with Samsung and LG and Sony and Apple, they’re aspiring to bring products to market that those companies don’t have a product for yet.”

Mass Fidelity, DreamQii and Vanhawks have yet to deliver their products. As crowdfunding campaigns have ballooned in size and popularity, concerns have grown about companies making promises about products that they can’t keep.

But horror stories of badly botched campaigns are relatively rare, argued D’Souza, who added that his supporters have not been skeptical of his claims to date.

“Most of the failures are the little guys out there, most of the big campaigns have actually delivered—and if not, they’re late on the delivery schedules they may have promised,” he said.

“We might have had one or two out of 3,000 (supporters) who are skeptics and said, ‘How can I be sure your product will deliver on its claims?’ Being a serious company, we made some casual promises of money back, we plan to launch in retail and offered the crowdfunding customers the same warranty we would for retail customers.”