“Big Reset” would result in loss of 9,000 jobs in Newfoundland and Labrador, unions say

The "Big Reset" is a five- to six-year plan that aims to reverse a course that threatens to send the province into insolvency. 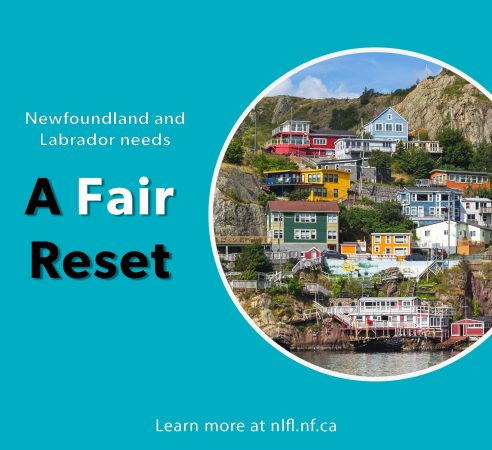 The recommendations have been outlined in the Premier’s Economic Recovery Team (PERT) report, which was released in May. The report proposes everything from tax increases and deep spending cuts to a streamlining of the public service and privatization, in a bid to counter soaring public debt in that province and prevent the threat of insolvency.

“We’re talking about a 4% drop in the number of jobs available to the province’s workers, with almost three-quarters of the job loss in health care,” NLFL president Mary Shortall said in an Aug. 10 statement. “Shockingly, the final PERT report fails to calculate the actual number of jobs that would be eliminated or factor in how access to vital services, including health care, would be reduced.”

The projected job loss figure is contained in the first of a new series of blog reports titled ‘A Fair Reset’, published on Aug. 10 by the NLFL. In the series, 10 economists, political scientists, geographers, writers and professors analyze the financial and socio-economic impacts of the PERT report and provide what they call “alternative, progressive recommendations.”

“The ‘Big Reset’ is meant to stimulate the economy, create jobs and attract young people to the province. If the government thinks that the PERT plan will accomplish this goal it is sorely mistaken and workers will pay the price,” said Unifor economist and ‘A Fair Reset’ blog author Kaylie Tiessen. “Newfoundland and Labrador’s economy could certainly use a reset, but not the one that PERT is calling for.”

“Premier Andrew Furey needs to create good paying jobs, not take them away,” said Shortall. “I’m asking the government to scrap the Big Reset and join with workers and unions to build a post-pandemic economy that will increase family sustaining jobs, inject cash into our local communities and keep workers from leaving the province.”

“A Fair Reset” blog will be released weekly starting Aug. 10, 2021 until the week before the scheduled resumption of the Newfoundland and Labrador House of Assembly on Oct. 18.