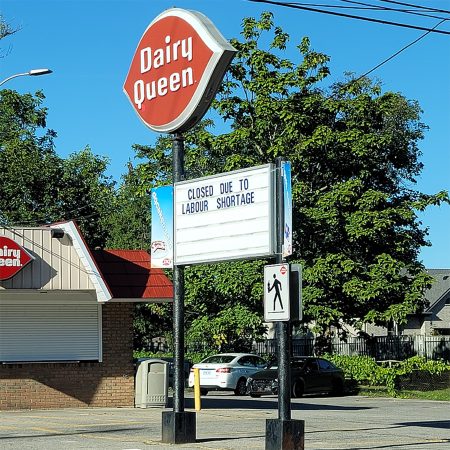 A Dairy Queen location in Brantford, ON closed due to Labour Shortage – September 2021

TORONTO — While the pandemic forced a lot of companies to go out of business, the post-pandemic era has surfaced another major problem – a serious labour crunch. The industries that are facing the worst labour crisis in the country are restaurants, manufacturing, retail, food service, and warehousing.

55% of Canadian businesses have been struggling with a labour crunch since the past few months. Also, a large chunk of businesses is finding it hard to retain employees. The current labour shortage issue is causing extreme delay in fulfilling the customer orders or requirements as well as limiting growth and damaging reputation for several Canadian businesses. In a recent survey by BDC (Business Development Bank of Canada) on more than 4200 businesses in Canada, the findings revealed that 49% entrepreneurs are trailing behind deadlines given serious labour shortage.

Amidst the grim circumstances of a labour shortage, foreign worker recruitment provides a silhouette of hope for Canadian entrepreneurs.

The company is offering to support Canadian businesses with every phase of the international employee recruitment. Being an immigration consultancy, Balram Immigration Consultancy will also take care of the immigration of the worker.

Canada is poised to witness an influx of international immigrants in the coming few months. The Canada Immigration Levels Plan 2021-2023 has declared that they will welcome around 401,000 immigrants every year, starting from 2021.

Balram’s Immigration is based in Ontario, Canada. The company can reportedly extend foreign worker recruitment services to most regions in Canada.