by The Canadian Press with files from Matt Powell  September 12, 2011

COTE-DU-RHONES, France—A furnace at a nuclear waste facility in southern France has exploded, killing one person and injuring four others, according to France’s Nuclear Safety Authority.

No radioactive leaks have been detected after the blast shortly past noon at the Centraco-operated nuclear site in the Languedoc-Roussillion region of France near the Mediterranean Sea, about 32 kilometres from the city of Avignon.

The French nuclear agency pronounced the accident “terminated” and say the had control of the situation in less than an hour.

While there is no nuclear reactor on site, the facility produces a fuel called MOX which is used to power French nuclear plants and is made by recycling plutonium and uranium.

The cause of the blast was not immediately known and an investigation is underway.

Centraco is located on the 300-hectare Marcoule Nuclear site, which also houses a research centre and four industrial facilities. 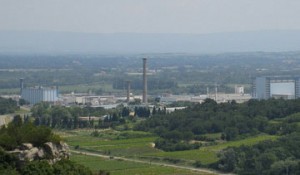 France’s EDF electric power company, whose subsidiary operates Centraco, said the furnace that was involved in the explosion is used to melt slightly radioactive metals like gates, pumps and tools.

France is the world’s most nuclear-dependent country in the world, with 75.2 per cent of the country’s power coming from the 58 nuclear reactors that produce more than 63,000 megawatts of nuclear power a year.

The country is also a major exporter of nuclear power, treats nuclear waste from around the world and state-owned nuclear giant Areva is one of the country’s most prominent companies.

EDF and Areva have built reactors around the world and inked recent deals to build Poland’s first nuclear plant and to create a joint-venture with an unnamed Chinese nuclear company.

France also treats nuclear waste from around the world.

In Ontario, nuclear power accounts for 33 per cent (about 11,440 megawatts) of daily energy usage at CANDU reactors in Pickering, Darlington and Bruce County, according to the Independent Electricity System Operator (IESO), Ontario’s power generation commission.

While there are no nuclear waste recycling plants in Ontario, the Chalk River laboratories, about 180 kilometres north of Ottawa, is a major nuclear research and development site for CANDU nuclear technology. The facility also supplies about a third of the world’s medical radioisotopes.

In 2008, a leak of hard water containing tritium shut down the facility.

The plant was shut down again in May 2009 after a heavy water leak at the base of the reactor vessel was detected. The reactor was defuelled and drained of all of its heavy water moderator. The reactor remained shut down until August 2010, essentially halting medical radioisotope production for 15 months.

The leak resulted in a federal action to shut the plant down because the reactor was not connected to emergency cooling pumps when the leak occurred. The pumps are necessary to cool the reactor in the case of a disaster like an earthquake.