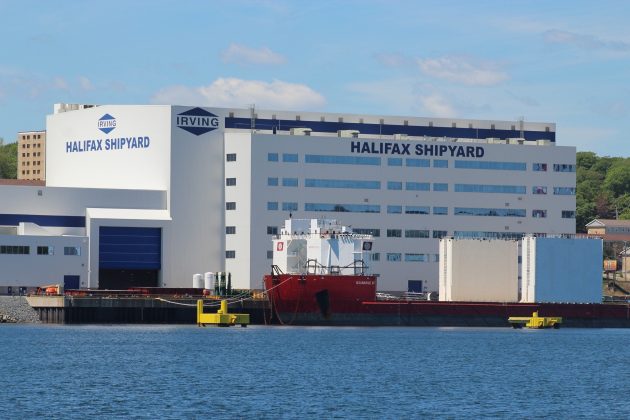 Exterior of the Halifax Shipyard building behind ships in the water. (CNW Group/Unifor)

“Unifor is saying enough is enough and has filed charges against the company at the labour board and we are asking the labour board to uphold the labour relations principle of common employer,” said Jerry Dias, Unifor’s National President in a statement.

“This would prevent the company from outsourcing the work to itself and the shady practice of getting rid of unionized workers to hire someone else for less. We’ve seen it time and time again during the pandemic, how corporate greed has decimated communities and undermined workers. Shame on Irving,” said Dias.

“It was never intended to allow corporations to bid the work and then subcontract it back to themselves at lower wages in order to pocket more profits,” said Adam Hersey, Unifor Local MWF 1 business agent and metal fabricator of 11 years at the Halifax Shipyard.

Outsourcing will push workers out of their hard-earned fields and force them to retrain into different departments – just so the company can save $10 to $15 an hour per person.

“It’s a slap in the face, considering how hard we worked to help this employer secure that contract. We bid on a contract with the current wage and we won it, and now Irving is outsourcing our work to another company it already owns. This clearly doesn’t pass the smell test,” said Hersey.

Unifor Local MWF 1 – which represents 1,000 shipbuilders – and Irving reached a collective agreement in 2018, which acknowledges that warehousing work has been done by the local since 1949.

The union is asking Irving Shipbuilding to reconsider its decision and keep warehousing employees who have worked hard for many years.