After dropping out of school at 12, Li made his initial fortune by starting his own plastics factory. He's spun his success into a conglomerate that spans the globe 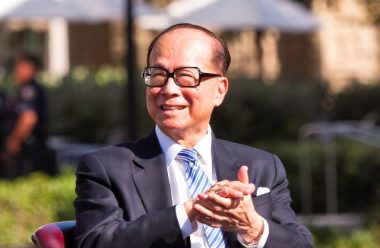 Li, who turns 90 this summer, will retire from his flagship company after CK Hutchison Holdings’ general meeting May 10. PHOTO: EdTech Stanford University School of Medicine/Flickr

Hong Kong billionaire Li Ka-shing, whose rags-to-riches story paralleled the spectacular rise of the Asian financial centre, said Friday he will retire as chairman of his sprawling conglomerate and hand control to his eldest son.

Li, who turns 90 this summer, made the announcement at a packed news conference after his four companies, including flagship CK Hutchison Holdings, released their annual results.

Li said he’ll retire as chairman and executive director of his flagship company after the company’s annual general meeting on May 10, bringing an end to years of speculation about his retirement date.

“As I look back over all these years, I feel very grateful and blessed that I was able to create Cheung Kong, create value for shareholders and serve society,” he said. “It’s my greatest honour.”

CK Hutchison Holdings was formed after he combined his property firm Cheung Kong with his conglomerate Hutchison.

He will remain as a senior adviser while his eldest son, Victor Li, a managing director, will become chairman, the company said.

“I’ve got confidence in him,” Li said, adding that the two had spent 33 years working together. “Victor is OK.”

Li said in 2012 that he planned to have Victor take over but had avoided specifics for years.

Li has been Hong Kong’s wealthiest individual for two decades, according to Forbes, which estimates his net worth at $36 billion. He’s No. 23 on its global ranking.

Hong Kong residents revere Li for his moneymaking prowess, which has earned him the nickname “Superman.”

His annual news conferences are broadcast live by local TV stations while he holds forth on varied topics as reporters hang on his every word.

On Friday, he discussed the property market and his stock market investment strategy. He even touched on Chinese politics, saying he would have voted for President Xi Jinping if he was allowed to and that he favoured a controversial express rail checkpoint planned to link with mainland China.

Li dropped out of school at age 12 and famously made his first fortune after he started his own factory to make plastic flowers for North American customers.