Increasing the employment rate in every "vulnerable'' workers' group by just one per cent could expand Canada's economy by about half a percentage point, estimates a "secret" report 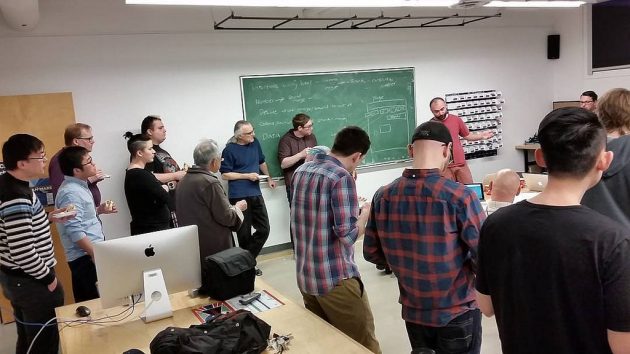 PHOTO: Lunch break and talks about how to represent data on the workforce and gender gaps through sound/Megan Smith via Flickr

A presentation to top civil servants last year, marked “secret,” says the government wanted to find a way to dispel stereotypes that act as employment barriers.

For example, the documents point out that employers often are reluctant to hire people with disabilities, believing it will be too difficult to accommodate them as workers.

Increasing the employment rate in every “vulnerable” workers’ group by just one per cent could expand Canada’s economy by about half a percentage point, officials estimated in the documents – a noticeable amount when annual growth is about two per cent.

Also, new technologies are forcing companies to look for highly skilled workers, and many of the workers in these groups are considered lower-skilled.

Officials worried the labour-market shift will make it even tougher for these workers to find jobs, cause those working to lose their positions, and increase reliance on federal benefits for income, which would strain Ottawa’s finances.

“The unpredictability of the changing nature of work and demographic pressures could exacerbate the vulnerabilities and ‘tip’ those at the threshold into the most vulnerable group,” the documents read.

The Canadian Press obtained documents under the federal access-to-information law at a time when the Liberals have publicly talked about using the 2019 budget – the last before next fall’s federal election – to focus on skills training.

Social Development Minister Jean-Yves Duclos said recently in a year-end interview that more needs to be done on skills training to make sure that people who have harder times in the workforce feel like they have fair shots in the job market.

The government is in the midst of a wide review of its skills-training programs and the results could feed into any new spending the Liberals are eyeing.

Finance Department documents about the review note that Canada’s training programs have for years focused on responding to the immediate needs of workers who lose their jobs, for example.

But emerging technologies are making that focus obsolete. Instead of finding new employers hiring for generally the same kind of work, many people who lose their jobs need substantial retraining before they can get new ones. The review is supposed to determine the “relevance of current programming and where future investments should be made.”

Focusing on lower-skilled individuals, who typically don’t have post-secondary educations, and boosting their employment rates by just one per cent would add 128,000 workers to the labour market and increase the size of the economy by approximately 0.4 per cent, the documents say.

All those people represent what the documents describe as untapped labour supplies that could help fill holes in the labour market as more employees are set to retire without enough new workers to take their places – creating a drag on the economy and a federal treasury that relies heavily on income taxes.

The “vulnerable” groups identified in the documents are also part of this demographic shift, which officials say means “a greater proportion of workers may face multiple vulnerabilities and barriers.”