With a whopping price tag of $110 million dollars per kilometre, the short stretch of road through Kicking Horse Canyon is expected to become the priciest road work in Canadian history 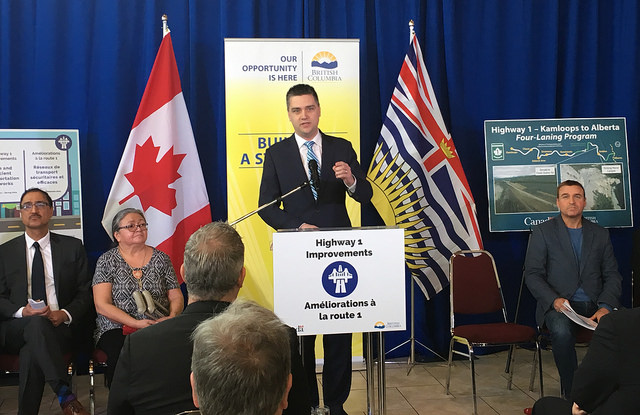 B.C. Transportation Minister Todd Stone said the TransCanada expansion outside Golden, B.C. will likely be the most expensive stretch of road anywhere in the country. PHOTO: Province of British Columbia/Flickr

KAMLOOPS, B.C.—The federal and British Columbia governments have announced $469 million in upgrades to two stretches of Highway 1 through southeastern B.C., including a section that could be the most expensive stretch of road in Canada.

B.C. Transportation Minister Todd Stone says most of the funding, $450 million, is for improvements to a four-kilometre section of the Kicking Horse Canyon east of Golden.

At an estimated $110 million dollars per kilometre, Stone says the upgrades to Highway 1 through the canyon will likely make the roadwork the most expensive in provincial and Canadian history.

He defends the price, saying the short section of highway has a fatality rate three-times higher than the provincial average.

Stone and federal Minister of Infrastructure and Communities Amarjeet Sohi also announced $19.4 million to four-lane Highway 1 about 20 kilometres west of Golden, from Donald to Forde Station Road, and make other improvements.

Work on the section west of Golden is expected to begin later this year, but engineering and other challenges linked to the Kicking Horse upgrade means construction won’t start until 2019 and will take at least five years to complete.

“This will be one of the most technically challenging projects in our province’s history,” Stone says.

In comparison, he points to a $3.5-billion, 10-lane bridge planned for construction over the Fraser River between Richmond and Delta, south of Vancouver, saying it will take two fewer years to build the bridge than the four-kilometre Kicking Horse upgrade.

“Fundamentally, you are dealing with a very steep canyon on one side and a mountain on the other side, so there is a tremendous amount of blasting required and then the technical challenges come into play, in terms of do you tunnel, do you cantilever out,” Stone says.

Sohi says the federal government is contributing $222 million of the total cost.

British Columbia’s share is set at $247 million and Stone says the project is expected to create 1,400 jobs.