Opposition parties are asking what the Liberals are hiding by refusing to co-operate with the financial accountability officer, a role created by Wynne's Liberals in 2013 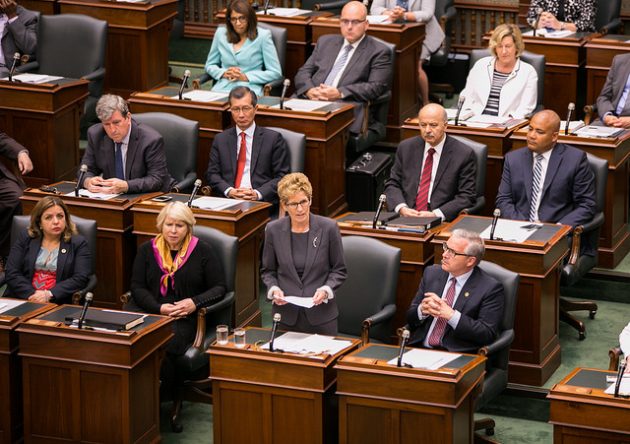 Ontario Premier Kathleen Wynne created the financial accountability office to get the NDP’s support for the 2013 Ontario budget. PHOTO: Premier of Ontario Photography/Flickr

TORONTO—Ontario’s budget watchdog says the Liberal government is still withholding key information he needs to do his job.

Financial accountability officer Stephen LeClair says his office made six information requests of government ministries and agencies in its first year of operation, but received only four partial answers.

LeClair says ministries too frequently cite a cabinet confidentiality exemption that he believes does not apply to forecasts of future government revenue and spending, and make it more costly and difficult to do his duties.

He says it’s difficult to know if a bill is a good idea without having access to the government’s forecasts of its impact, or to know if there are areas of uncertainty that his office should point out to MPPs.

LeClair made similar complaints about being refused government information when he released a report last fall into the Liberals’ plans to privatize Hydro One.

The Progressive Conservatives say they wonder what the Liberals are hiding by refusing to co-operate with the financial accountability officer, while the New Democrats say the government clearly has a problem with independent oversight.

“The Liberal government has tried to undermine the auditor general, they’ve fought with the ombudsman and they are refusing to give the FAO the information he needs to do his job,” said NDP finance critic Catherine Fife.

The Liberals agreed to create the financial accountability office to get the NDP’s support for the 2013 Ontario budget when they were in a minority and needed votes from another party to avoid triggering an election campaign.