At a cost of $5.3 million, the visitor screening centre comes with metal detectors and X-ray scanners for bags. The upgrade is the first new addition to the building in more than 100 years 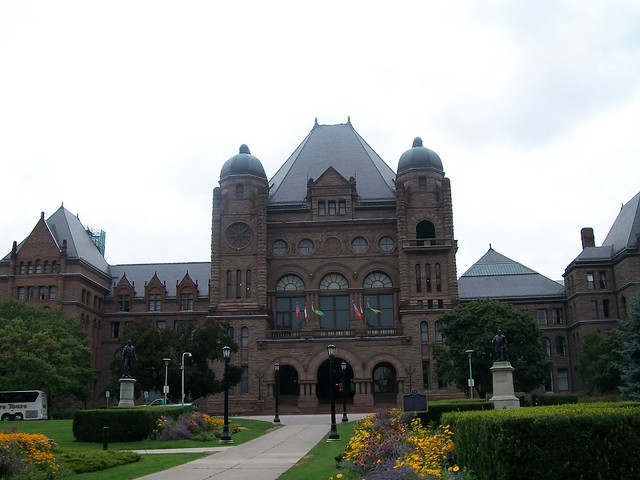 TORONTO – The Ontario legislature is introducing airport-style security next year, as it becomes one of the last provinces to start making all visitors pass through metal detectors – upgrades being made in the wake of two deadly attacks in Toronto last year.

Currently, visitors to Queen’s Park can enter through several doors, staffed by legislative security officers, and must present a government-issued ID. Visitors only have to go through a metal detector and have their bags scanned to get into the public galleries of the chamber, to watch question period, for example.

That will change around this time next year. Construction is set to begin this week on a visitor screening centre, to be built as an addition outside the building’s south basement entrance. All visitors entering the building will have to pass through that one entrance, with metal detectors and X-ray scanners for bags.

“I think we were very blessed to have been able to keep the Ontario legislature as open and as accessible for such a long time,” sergeant-at-Arms Jackie Gordon said in an interview. “It’s wonderful that we’ve been able to do that, but I think the security landscape suggests we need to consider a more robust process.”

That security landscape includes major incidents in Toronto last year, Gordon said, with a shooter killing two people and injuring 13 on a bustling stretch of the city’s Greektown, and 10 people being killed and another 16 injured in a van attack.

“These incidents bring it closer to home,” Gordon said. “They hadn’t really happened in this backyard and now we’re seeing that change.”

Most other provincial legislatures already require visitors to pass through a metal detector to enter the building, with only a couple requiring it just for entry to public galleries of the chamber.

When Gordon started as sergeant-at-arms in 2017 part of her mandate was to review security, and she noted that a number of reports over the past decade or so had recommended such security measures and having only one public entry point.

Under Premier Doug Ford, the legislature has seen an increase in incidents of people protesting from the public galleries while the house is sitting, but Gordon said that isn’t really a factor in the security upgrades.

The new visitor screening centre, with a cost of $5.3 million, will be the first new addition to the building in more than 100 years, said Jelena Bajcetic, director of precinct properties. The last addition was the construction of the entire north wing, which includes the legislative library.

This project has had to fit in with long-term planning for the building and the grounds, she said, which includes one day undertaking a restoration of the building to upgrade electrical, fire safety and plumbing systems.

It’s possible that when that time comes, the functions of the legislature will have to move to a temporary new home, as is the case currently on Parliament Hill, and with P.E.I.’s legislature. In Ottawa, a temporary House of Commons was built in the refurbished West Block while the iconic Centre Block undergoes a major makeover expected to span at least a decade.

“It’s been talked about with this building for decades, and so the time will come when it’s immediately necessary,” Bajcetic said. “We’re still in the very early stages of planning. It’s a massive process.”