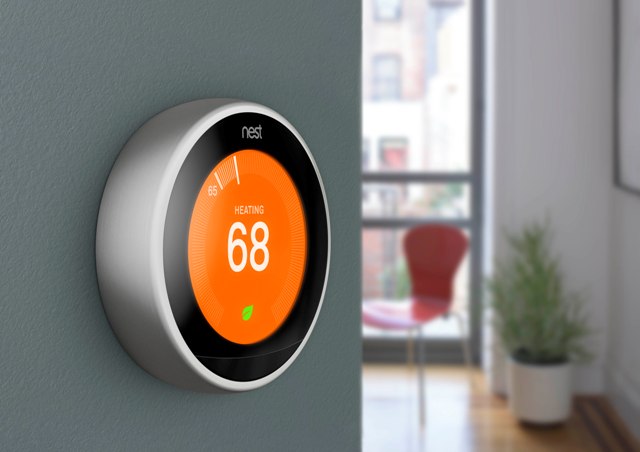 Nest says its smart thermostat saves customers an average of 10 to 12 per cent on heating and 15 per cent on cooling costs. PHOTO: Nest

TORONTO—Eligible Ontario households will be able to get smart thermostats for free on a first-come, first-serve basis under a new government program—along with more benefits to follow for small businesses and cleantech companies.

Environment Minister Chris Ballard announced Aug. 30 that $377 million in proceeds from Ontario’s cap-and-trade auctions this year will be used to establish a Green Ontario Fund. That not-for-profit provincial agency will oversee programs and rebates for homes and businesses to reduce energy costs.

Part of that will be the GreenON Installations program, under which eligible households can register to have a technician visit and install a smart thermostat at no cost. There will be 100,000 smart thermostats available under the program to people who register through the Green Ontario Fund website.

Ballard estimated the smart thermostats and installations will use about $40 million from the green fund, and said the government will be announcing more programs funded by it in the future.

Smart thermostats are connected to the internet, adjust themselves automatically and can be programmed and adjusted through smartphones.

Environmental Defence applauded the announcement, calling the smart thermostat offer a “goodie” to entice Ontarians into a deeper conversation about energy use.

“They can have a big impact,” the organization said in a statement. “Just changing out an old thermostat for a smart one can reduce energy use—and energy bills, and carbon emissions—by over 10 per cent.”

Ontario has so far raised nearly $1 billion from its first two cap-and-trade auctions. The Liberal government hopes to raise $1.8 billion this year and $1.4 billion a year starting next year.

“Ontario’s successful cap-and-trade auctions have generated millions of dollars to put toward practical solutions that support clean growth,” she said “We look forward to seeing the Green Ontario Fund expanded with programs to support energy savings for small businesses and invest in clean technologies—important steps that will spark innovation and spur our economy forward.”

The next auction in the cap-and-trade system is set for Sept. 6.

The government has also recently announced that $200 million from cap-and-trade proceeds will be used to establish a fund for schools to improve energy efficiency, such as installing new windows, lights and furnaces, as well, up to $657 million over five years will be used for social housing repairs and retrofits.

—With files from Cleantech Canada staff