Japan's economy, the world's third largest, has stagnated for years and massive monetary stimulus has so far failed to jolt it into a sustained recovery

July 27, 2016  by Satoshi Sugiyama And Elaine Kurtenbach, The Associated Press 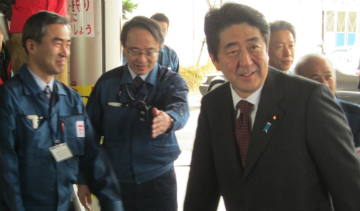 Speaking in the southern city of Fukuoka, Abe put the scale of the extra spending at more than 28 trillion yen ($265 billion).

That would be nearly six per cent of Japan’s GDP. But analysts said they believed much of the money was already in the pipeline, and the money would be spread out over multiple years, diluting its impact.

The proposed package is due to be approved by the Cabinet on Aug. 2, the Kyodo news service reported. It would then be included in a supplementary budget for consideration by the parliament’s extraordinary session in September.

“The new economic package needs to be something which would bolster domestic demand and ensure a trajectory toward economic recovery,” Abe said.

Chief Cabinet Secretary Yoshihide Suga told reporters in a routine briefing that the ruling party and its coalition partner the Komeito were still haggling over details of the plan.

He said raising the minimum wage by at least 20 yen (about 19 cents) an hour is another key aim.

“Raising the minimum wage and encouraging more consumer spending is extremely important and we will work hard to achieve that,” Suga said.

Japan’s economy, the world’s third largest, has stagnated for years, and massive monetary and government stimulus have so far failed to jolt it into a sustained recovery.

Abe took office in late 2012 vowing to “bring Japan back,” and has made some progress toward his goal of higher inflation and faster growth. But the aging and shrinking of the Japanese population has discouraged companies from investing much in the home market, and wages have not risen significantly enough to drive a spending boom, despite a very tight labour market.

Among other measures, Abe is proposing improved wages for childcare and elder care workers, introduction of needs-based scholarships for college students and reducing the number of years workers are employed that are required to earn pensions.

A large share of the spending will go to improving infrastructure, such as expanding ports to accommodate ultra-large ships and accelerating a decades-long high-speed maglev train project.

Campaigning for a parliamentary election held earlier this month, Abe promised fresh help for the economy, and ordered his economy minister, Nobuteru Ishihara, to draw up the package.

Earlier reports put the size of the package as low as 6 trillion yen (about $57 billion).

Economists say the Bank of Japan also will likely expand monetary stimulus at a policy meeting that begins Thursday.

“The Abe administration continues to highlight the importance of co-operation with the Bank of Japan for a fiscal stimulus package,” Alex Wijaya of CMC Markets said in a commentary.