A 2015 panel said the bunker was the safest way to deal with the radioactive waste, but the federal government has yet to green-light the project 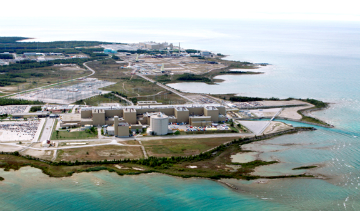 The proposed facility would be built at the Bruce nuclear site. PHOTO: Canadian Nuclear Safety Commission

TORONTO—Ten groups and individuals have been given another $146,000 to help them weigh in on the wisdom of burying hazardous nuclear waste in a bunker close to the shore of Lake Huron.

The bulk of the new money from the Canadian Environmental Assessment Agency is earmarked for indigenous people to take part in the review of the safety of the contentious project proposed for near Kincardine, Ont.

The Historic Saugeen Metis have been allocated just over $54,000—half the cash being given to aboriginal groups to participate.

The funding is aimed at allowing recipients meaningful input as the agency moves toward coming up with a final recommendation to federal Environment Minister Catherine McKenna on whether the Ontario Power Generation project should be allowed to proceed and, if so, under what conditions.

Environmental and other activist groups opposed to the project are also among funding recipients.

Individuals include retired sheep farmer Eugene Bourgeois, of Inverhuron, Ont., who was given $7,000. Bourgeois, who lives near the proposed site but was previously denied funding to participate in the environmental assessment of the project, has alleged the entire process was fixed.

“The predetermined conclusion ensured that no opposing views or scientific evidence would sway or be taken into account,” Bourgeois said at one point.

The funding for participants is in addition to $455,000 previously allocated to about two-dozen groups and individuals.

The proposed deep geologic repository, currently estimated to cost about $2.4 billion, calls for about 200,000 cubic metres of low and intermediate nuclear waste to be stored in bedrock up to 680 metres underground about 1.2 kilometres from Lake Huron starting in 2026.

Scores of Great Lakes communities on both sides of the border have passed resolutions or otherwise expressed opposition to the proposal on the basis that storing hazardous waste so close to such an important water source is irresponsible. Nevertheless, a joint assessment panel in 2015 agreed with OPG that the plan was the safest way to deal with the radioactive waste and gave it the tentative go-ahead.

Since then, however, the federal government has delayed its decision, most recently asking OPG to report back on alternative locations to the proposed Bruce Nuclear Generating Station for the bunker. The OPG report maintains that trucking the radioactive material—potentially from one end of the province to the other—would pose more of a health and safety risk than burying it at the Bruce site, where much of it is produced.

The report—widely panned by project opponents as grossly inadequate—is now before the assessment agency as it prepares its final recommendations for McKenna.

McKenna is currently slated to decide either late this year or early next.