The first commercial-scale facility of its kind in Quebec, plant is expected to produce 40 million litres of renewable fuel oil each year 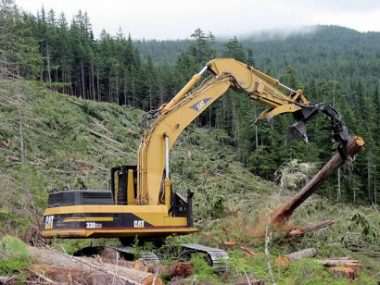 The biocrude plant will use forestry slash and other byproducts to create millions of litres of renewable fuel each year. PHOTO: David Stanley, via Wikimedia Commons

PORT-CARTIER, Que.—Crews have broken ground on a major cleantech project on the north shore of the St. Lawrence River in eastern Quebec.

Designed to take advantage of the province’s abundant supply of biomass to produce clean fuel, the Cote Nord Project will convert tens of thousands of metric tonnes of slash and other forest industry residues into millions of litres of renewable biocrude each year.

The project, known officially as AE Côte-Nord Canada Bioenergy Inc., will cost $103.9 million to build and is expected to come online by the end of next year.

The Canadian and provincial government have agreed to cover the majority of the construction costs. The feds will invest $44.5 million in the project through Sustainable Development Technology Canada (SDTC) and Natural Resources Canada (NRC), while Quebec plans to contribute $32 million. Meanwhile, the three private sector companies collaborating on the project—Ensyn Bioenergy Canada, Arbec Forest Products and Rémabec Group—will invest $27.4-million.

“This project, a first in the country, allows Canada and Quebec to be positioned as leaders in the field of renewable energy production, while addressing climate change,” Cote-Nord president, Serge Mercier, said.

“The use of our renewable biofuel as a substitute for fossil energy will generate an annual reduction in greenhouse gas emissions of up to 70,000 tonnes CO2. With the huge potential already presented by the U.S. market and our desire to develop the Quebec and Canadian markets, AE Côte-Nord Canada Bioenergy Inc. is positioned to succeed in the new, promising industry of biofuels,” he added.

Mercier is also vice-president of Finance and Business Development at Arbec, which operates a sawmill in Pont-Cartier close to the new Cote-Nord plant.

With the forestry industry playing a key role in the project, the province’s Minister of Forests, Wildlife and Parks, Laurent Lessard, said the new site will strengthen Quebec’s existing economy while supporting the emergence of a new bioenergy sector. The province has already set aside 170,000 tonnes of residues from government forests for use at the plant.

The Cote-Nord plant takes advantage of a made-in-Canada technology pioneered by Robert Graham and Barry Freel at the University of Western Ontario in the 1980s. Biomass firm Ensyn Corp., which will own a 50 per cent stake in the new biocrude plant, holds the rights to the Rapid Thermal Processing (RTP) along with its joint venture partner, U.S. engineering conglomerate Honeywell International Inc.

In use for more than 25 years, including at a smaller-scale facility in Renfrew, Ont., the process uses hot flowing sand to fragment biomass into vapours, gases and char. The vapours are rapidly cooled and recovered as light biocrude, while the heated gas and char are recirculated and used to reheat the sand, continually fueling the process.

According to NRC, the renewable fuel produced reduces greenhouse gas emissions 70 to 90 per cent compared to conventional fossil fuels. The biocrude can be used for heating or refined to produce cleaner transportation fuels.

Once completed, the Cote-Nord project is expected to produce approximately 40 million litres of biocrude using 65,000 dry metric tons of forestry byproducts from Quebec every year.